HERE’S MIKE: The Huckabee blog has the video and the favorable commentary. 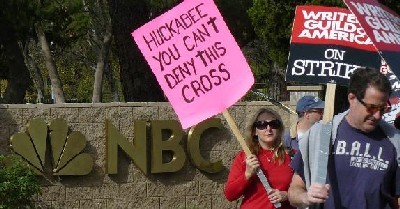 TALKS ONLY TO LENO: No comments to reporters afterward by the candidate, CBS reports. He didn’t want to linger long whilst unfriendly pickets were about, no doubt.

MORAL SUPERIORITY: Brummett notes that Huckabee is being more overtly religious in Iowa, one more reason to fault his weird pulled-ad news conferences, which the D-G today unbelievably defended. Even if Huckabee was somehow naive about this (which I don’t believe), he had other options, as Brummett notes in choosing another descriptive.

Cynical? Inane? It certainly was showboating and irrational. Campaigns are always producing ads that they make internal decisions not to air. They don’t normally reveal these ads so they can crow of their supposed superior morality about not using what they are, at that moment, using.

But his tough week – and the shaky underpinning of his candidacy – have raised serious questions about whether his campaign can convert his Iowa showing into a GOP presidential nomination or whether he is destined to founder as other long-shot conservatives like Pat Robertson and Pat Buchanan did after early splashes.

AN ARKANSAN LOOKS AT HUCK: A letter from an Arkansas Republican makes the case against Huckabee’s candidacy. It’s circulating on conservative websites. And while we’re at it, here’s another bill of particulars against Huck from a conservative.

LIE DOWN WITH DOGS: This is what happens when you welcome one of the nutty anti-immigrant Minutemen into your campaign.