The Weekly Dig, an alternative newspaper in Boston, has sent folks up to New Hampshire for presidential primary coverage and is sharing the work with other weeklies. Here’s one dispatch that includes coverage of Mike Huckabee’s appearance at New England College yesterday, where writer Chris Faraone also took these photos. The Dig crew is irreverent, to wit:

Huckabee might be an opportunist evangelical, but the dude pumps up the jam. Unlike Edwards and Obama, whose pre-entrance entertainment was limited to Jock Jams blaring over makeshift sound systems, Huckabee nailed the entertainment angle. Before the candidate surfaced, a local band played classic rock songs that are really liberal blasts about social inequity but that primitive conservatives love anyway because they don’t really understand the lyrics.

When he finished playing bass with the invited band, Huckabee introduced Chuck Norris, who, despite fear of encountering his fatal fists of fury, I’m compelled to report has a wife who inspires boners. While the Norris endorsement started out as – or at least I’m hoping started out as – a joke, it has become an integral component in Huckabee’s campaign. 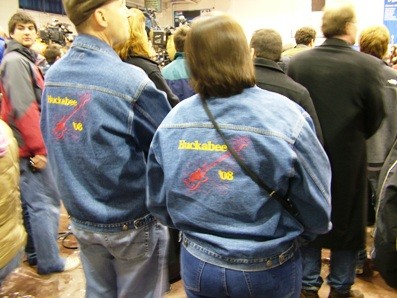