The Thursday night line is open. Finishing up:

* KEYSTONE XL PIPELINE AND THE ENVIRONMENT: The Sierra Club and others are out with a major report on the proposed Keystone XL pipeline. It’s a “climate disaster.” Read it. Send a copy to Republican U.S.. Rep. Tim Griffin, who’s made approval of this environmental calamity a top priority because it enriches his oil industry patrons.

* SENTENCE IN A LOG TRUCK DEATH AND A PUSH FOR SAFETY: On Aug. 29, 2012, James Hunter, 53, of Sparkman was killed on Highway 7 in Clark County when the load on an oncoming log truck shifted in a series of curves and the truck turned over, crushing Hunter’s car. Michael Mann, 44, of Sparkman, the driver of the truck, appeared in district court in Arkadelphia today and entered a no-contest plea to a negligent homicide charge. Mann was sentenced by Judge Randy Hill to a year in jail, with 11 months suspended; 100 hours of community service, a year of probation, a one-year license suspension and $1,165 in fines on negligent homicide and careless driving charges. The victim’s family made impact statements and said they hoped to use the case, in cooperation with the trucking company, prosecutor and police, to inspire a public safety initiative. The truck was driving 62 in a stretch of S-curves where the speed is recommended at 30 mph, reckless enough to support a criminal charge. Mann’s attorney said he would appeal to circuit court.

* CONJOINED TWINS; AN ARKANSAS CONNECTION: Channel 4 reports on successful surgery in Dallas last weekend to separate conjoined twins who shared a liver and intestines. They are children of Dave and Jenni Ezell, former Russellville residents now living in Oklahoma.

* HATERS GONNA HATE, BUT THEY SHOULDN’T DO IT IN PUBLIC SCHOOLS: Fox 16 reports on the unsettling experience of a child in a fifth grade class at Baker Elementary in western Little Rock (a child of an Arkansas Times co-worker, in fact). The child objected to a substitute teacher who went off on the evils of homosexuality. Parent complained. School officials looked into it and have banned the substitute from returning to the school. She was provided by an outside contractor . The comments building up on the Fox 16 account are interesting, sometimes saddening. A constitutional right to espouse religious belief and intolerance in a public school classroom? Praiseworthy? Happily, the Pulaski County School District does not agree. Why in the world would a 5th-grade teacher even bring the subject up?

* RECORD ENROLLMENT AT UNIVERSITY OF ARKANSAS: The UA-Fayetteville will announce fall enrollment tomorrow. The campus has already said it will be a record, but hasn’t released specific numbers.

* THE DEMOCRATIC SOUTH SHALL RISE AGAIN: Politico reports on a cooperative effort by Democratic Parties in the South, including Arkansas, to join to build a cooperative strategy to rebuild.

According to officials, the committee will have three main goals: better training local Democratic political operatives to work on campaigns in the region, building an extensive data and analytics operation to be deployed on state-level elections and working on regional messaging.

The data component in particular will be modeled after the first-rate operation put together by President Barack Obama’s 2012 campaign.

* ACTIVE SHOOTER JEREMY HUTCHINSON GOES VIRAL: Speaking of the state Senate, with a little push from me, Sen. Jeremy Hutchinson has gone viral on the web over his admission to the Democrat-Gazette that he shot someone with rubber bullets during a school “safety” exercise with police in Benton. Rep. Kim Hammer was in on this goat-roping, too. MSNBC tells me that Hutchinson took pains to say he hadn’t shot an actual teacher, but had shot a police officer playing a teacher in the exercise. Oh. Gawker, reporting here, dug up another priceless quote from Gatorbait Hutchinson:

It was intense, enlightening and when we weren’t being shot, it was fun,” said Sen. Hutchinson. “I learned how little I knew about school safety.

Maybe he can be state sergeant-at-arms should he lose his re-election bid but Uncle Asa, the NRA’s boy in Arkansas, gets elected governor.

Talking Points Memo dug deepest into the story. It’s kind toward Hutchinson, but, as the article says, the story is  “more interesting” than the punchline ‘Hutchinson shoots teacher.’ Because the exercise arranged by Benton Police Chief Kirk Lane illustrates pretty clearly the dangers of split-second decision making, even by trained people where people with guns aren’t wearing uniforms, innocent people are in the line of fire and marksmanship combined with body chemicals don’t produce certain outcomes.

Lane invited Hutchinson and another Arkansas lawmaker, state Rep. Kim Hammer (R), to participate in an active shooter simulation at a local school. Police handed Hutchinson a rubber-bullet loaded gun, gave him some basic training on breaching and entering rooms, and then had him run into the school, where officers in plain clothes took on the roles of either shooters or teachers.

“The first two simulations they were just all bad guys, and so we got used to running in, you’d go to the sound of the gunfire,” Hutchinson said. “And then they threw a twist in on the third one, where there was what appeared to be a bad guy in the hallway, shooting into the classroom. And so, just instinctively, I shot. And then I turned the corner and see that the bad guy that I had just shot was actually shooting with another bad guy, which kind of blew my mind for a second.” 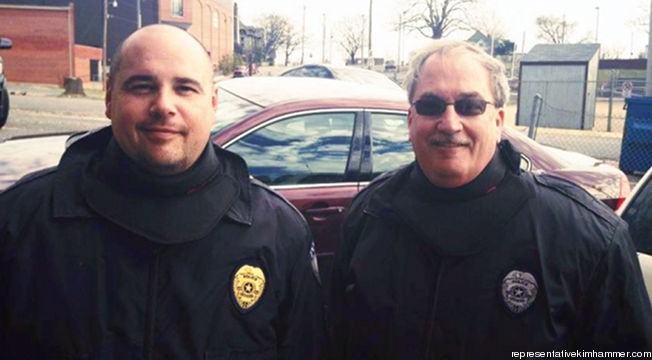