The Little Rock Police Department today showed off their network of 53 surveillance cameras and monitoring station, which can watch and record locations all over Little Rock in real-time. Officials said the recorded footage from the camera system, which cost $500,000, is archived for up to 10 days under a temporary directive put in place while a more permanent directive for how to use the cameras and how long to keep footage is being drafted. Under the current policy, after 10 days, the footage is deleted.

Installation of the cameras began in May and was completed in August. Lt. Casey Clark with the LRPD said that 20 of the cameras – which can zoom in tight enough to read the numbers on license plates, and feature a flashing blue light, prominent POLICE stickers, and a billet aluminum housing that Clark said could survive a shotgun blast — are deployed in the River Market area, where the LRPD wanted a “bigger footprint” due to heavy pedestrian traffic. The rest are divided among the city’s patrol divisions. The cameras in other parts of the city, Clark said, are deployed in response to crime trends. Twenty of the cameras, Clark said, feature a audible warning which loudly repeats “Warning! This area is under video surveillance and is being monitored by the Little Rock Police Department!” in both English and Spanish.

Today at the Northwest Patrol Division monitoring center, screens showed the east ramp of the Big Dam Bridge, a Shell gas station, and an apartment complex on Green Mountain Drive, among others. In the footage of the apartment complex, the windows of apartments could be seen. Clark said that all the cameras are placed on public property. He said the cameras have already helped solve at least ten auto break-in cases. In another case, Clark said, footage helped apprehend two suspects who police say  dumped a body in Two Rivers Park within view of one of the cameras. He said that in the River Market, auto break-ins and panhandling have decreased dramatically since the cameras were  installed. If a crime is reported in the vicinity of one of the cameras, Clark said, live footage from the camera can be fed to a responding officer in real time. 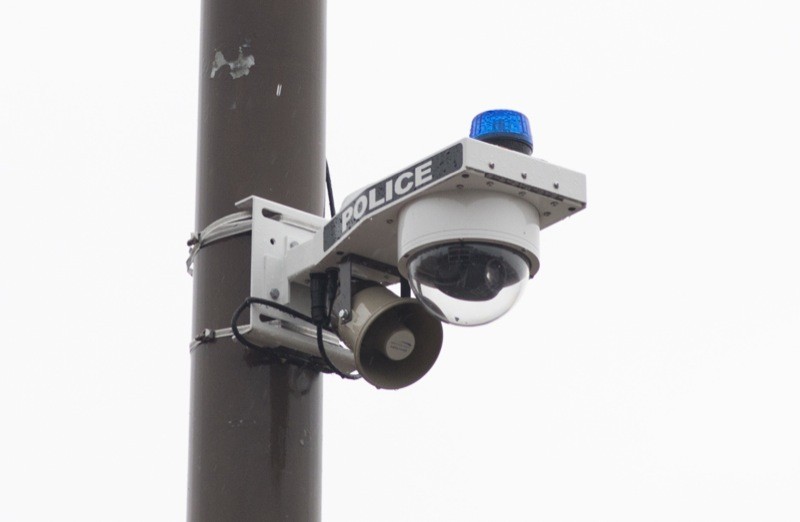 The footage shot by the cameras is subject to the Arkansas Freedom of Information Act, Clark said, which means that as long as the footage is not part of an ongoing criminal investigation, it is public record that can be obtained by anyone. For example, Clark agreed that if a divorce attorney had reason to believe that their client’s spouse had a tryst at the Big Dam Bridge, that footage would be available if it hadn’t been longer than ten days since the incident. Clark said that while he can’t promise the cameras are being monitored 24/7, they are being recorded 24/7.

Asked if 53 cameras are enough to cover the City of Little Rock, Clark said: “We could have 253 and it probably wouldn’t be enough. Every mini-mart you go in, every retail store has cameras. The biggest point we’re trying to do with the cameras is, we’re trying to gather more information to solve crimes. That’s it. We want to deter crime, and we want to solve crime. So, really, I couldn’t give you a number. Wherever there’s a public area, wherever there’s a chance that some criminal act could occur, I think that’d be a great location for a camera.”