Read this month's issue
Browse the issue archives
Advertisement
Home Arkansas Blog Jimmy Buffett cancels in NLR; he should have been with me in... 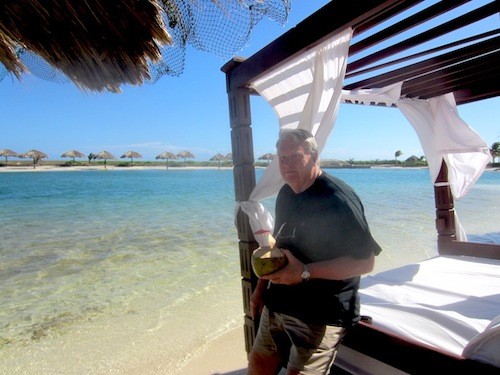 I got a quick look at e-mail in port on Roatan, Honduras.

Schools and government closed back home in Little Rock. Nearly 30 airline flights canceled. Brian Chilson sent a batch of frozen road photos, including the wintry scene on University Avenue above. Word came, too, of the cancellation of the concert by son of a sailor man Jimmy Buffett. Verizon Arena will be refunding purchases for Saturday night’s scrubbed show.

It would have driven me to drink. If I hadn’t already had a coconut drink, complete with umbrella, on the sandy shore of a Roatan beach club, where the booze in the blender was augmented by fat lobsters (two for $25) and mounds of boiled, fried and grilled shrimp from local water.

You can motor over to my Facebok page for more gloating. Most interesting event of the day was a stop at an animal park with monkeys, toucans, parrots, coatimundi, the pygymy white tail deer found there and more interesting stuff. It was interesting not because of the wildlife as much as for our young guide’s knowledge of the West Memphis Three case. Mentioning our home town brought forth not comments on  Bill Clinton, but on Damien Echols and the justice meted out in that case. Small world, made smaller by documentary films.