Read this month's issue
Browse the issue archives
Advertisement
Home Arkansas Blog The Darr saga: Will he quit? And, if he doesn’t, what then?

John Lyon at Stephens Media writes about the growing pressure on Lt. Gov. Mark Darr to resign for his admitted misuse of public and campaign money for personal expenses. To date, he has said he won’t quit.

Though a handful of Republicans have joined the calls for Darr to resign, none has yet stepped forward as an advocate of impeachment if he does not. Lyon provides an interesting quote on the point.  A simple majority in the bare-majority Republican House would be required to send the matter to trial in the Senate, but a two-thirds vote of the heavily Republican body is necessary to remove him. And read this:

“I’m personally not in favor of that,” Senate President Pro Tem Michael Lamoureux, R-Russellville, said last week of the possibility of impeaching Darr. “I haven’t heard anything that makes me think he needs to be impeached.”

So there you have it. A Republican in the line of succession to the governor’s office believes that a Legislative Audit finding that Darr converted taxpayer money to his personal use — a conversion Darr has admitted — does not justify impeachment. If taking public money for illegal purposes does not qualify for impeachment, you have to wonder what does.

To be generous, I suspect Lamoureux expects, as I do, that the matter will be resolved long before the fiscal session  by Darr resigning.

Then comes the question of what happens on a resignation. The law sets out a clear procedure for filling the office by special election within 150 days — once the governor declares a vacancy. Does the statute require the governor to declare a vacancy? I think there’s a tiny lack of clarity in the statute on the point. The article notes, however:

“The preliminary research that we’ve done says that the governor is required to call a special (election), so we’re continuing to study that in the event that we have a resignation,” DeCample said.

But with the office up for election in November anyway, a special election may be seen as unnecessary. DeCample noted that after Win Rockefeller died in office in July 2006, the state Democratic and Republican parties agreed not to ask for a special election and the office was allowed to remain vacant until the general election four months later, when Bill Halter won the seat.

Lyon provides GOP gubernatorial candidate Asa Hutchinson’s alibi for his refusal to call for Darr’s resignation. He says a prosecutor should review first and also says he Ethics Commission decision to fine Darr and ask for amended reports should be fulfilled. Well, of course it should be “fulfilled.” But the Ethics Commission isn’t a parole board. It has no criminal authority nor an ability to require a resignation. It gave Darr the maximum penalty available. Anybody with shame would quit. And any politician with shame would say that’s the proper course. It’s particularly strange that Hutchinson, a lawyer, said a decision to charge Darr would justify his resignation, rather than a conviction. Partisan prosecutors have been known to trump up charges, after all.

Just for the record: The fact of Sen. Paul Bookout’s violation of campaign finance laws became known on a Friday. He had resigned by the following Tuesday, barely 96 hours later.

In the Darr case, it was Dec. 12 when Darr publicly acknowledged “errors” in his use of his office expense account in response to a Legislative Audit that found he had spent more than $12,000 in tax money on illegal personal expenses, mostly commuting. On Dec. 18, Darr met with the Ethics Commission in private, but afterward his lawyer confirmed an account of Matt Campbell, who’d brought the complaint over Darr’s misuse of campaign money. He said Darr had acknowledged and apologized for “record keeping” mistakes covering some $44,000 worth of improper spending and illegal contributions. Dec. 30, the record became official with release of documents that said Darr had been fined $11,000 and received the maximum punishment available to the commission, a reprimand, for 11 violations of state ethics law.

* 18 days since he apologized in the face of a report he’d misused campaign money.

* 6 days since publication of a record fine for campaign finance and public money abuses.

No biggie to Michael Lamoureux or Asa Hutchinson or Republican Party Chair Doyle Webb. But he is a Republican.  So special treatment is in order. 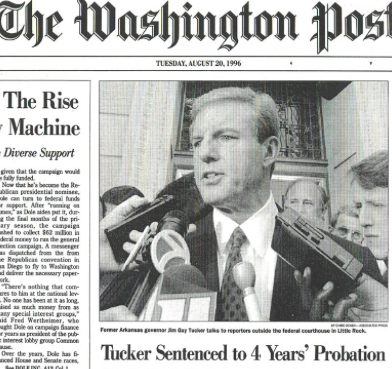 PS — A Republican of my acquaintance (another one of those who declines to express an opinion on Darr) thinks Democrats are getting off easy because they didn’t get similarly up in arms about the conviction of then-Gov. Jim Guy Tucker. Without replaying all the politically fraught context of Tucker’s prosecution 17 years ago (and the ultimate legal conclusion years later that he’d been convicted of something that was not a crime), the fact is that Tucker announced his plans to resign immediately after he was convicted, May 28, 1996. He set the date July 15 to allow for a transition. I can’t recall an outcry about the delay. It gave Mike Huckabee time to plan a formal investiture, though events upset that.

Tucker did resign as planned that day, but only after a huge hubbub when he had second thoughts for about four hours. He planned to appeal his conviction and he continued to believe he’d been wrongly prosecuted. But quit on schedule he finally did, if only after messing up Huckabee’s planned swearing-in ceremony.  It’s worth noting that the then-chair of the Democratic Party, Bynum Gibson, was among several close advisers who insisted to Tucker that he must follow through with the resignation.

Democrats didn’t jump Bookout for a resignation on Day One of his scandal  because they expected the situation to soon be resolved. It was. Darr was entitled to a similar bit of breathing space. It has expired.