The legislature’s Joint Performance Review Committee has begun hearing from six University of Arkansas officials and former employees in its review of financial problems in the fund-raising Advancement Division.

First up is the fired Advancement Division leader, Brad Choate, getting his first chance to speak publicly. He says UA “snookered” legislative auditors. He says he was “sacrificed” by Chancellor David Gearhart. This follows on themes others have advanced that deficit spending was a fact of life in Advancement, settled up by funds raised for the private UA Foundation in a practice dating back to Gearhart’s time as head of the division.

As the picture above shows, the legislature made it uncomfortable for all, arraying six people at a single table, with Geahart and Choate, once friends, side by side.

In the picture, at left, you have three people still working at the UA — Don Pederson, vice chancellor for finance and administration; Jean Schook, vice chancellor for financial affairs, and Gearhart. Then you have Choate; John Diamond, the former vice chancellor for university relations who’s insisted Gearhart fought greater disclosure, and (out of the picture in red) Joy Sharp, the former advancement division budget director who’s not spoken previously through prepared statement, as Choate once did, or otherwise. Her work has drawn most of the blame for accounting problems from the Gearhart administration.

John Diamond has repeated his assertion that Gearhart said at a staff meeting about a stack of papers relating to the budget problem: “Get rid of these and don’t create anymore.” He referred to a “culture of delete and destroy.” He delivered a lengthy critique of the UA response to FOI requests. He also spoke of Gearhart’s ire at the Arkansas Democrat-Gazette over multiple FOI requests. He viewed the newspaper as being out to get him.

But Choate, who was issued a formal subpoena that released him from a no-comment agreement he made with UA when he was discharged, was the star, if that’s the word. Benji Hardy reports:

Choate is delivering lengthy testimony, pulling no punches. He criticized U of A adminstrators, board of trustees, legislative auditors. He said UA has “branded” all this as a failure of Advancement, but it’s actually “a failure of finance and administration.” Said Gearhart, Schook, Pederson intentionally misled auditors in attempt to hide larger systemic failures. He said legislative auditors took Jean Schoolk’s word at face value and did not interview him or other key staff directly. “I think the university snookered the legislative auditors.” Says that Pulaski co prosecutor needs to look into perjury charge, as Gearhart’s testimony last fall was not factual about giving order to get rid of documents.”I was sacrificed,” he says.

GEARHART’S WAR WITH THE DEMOCRAT-GAZETTE 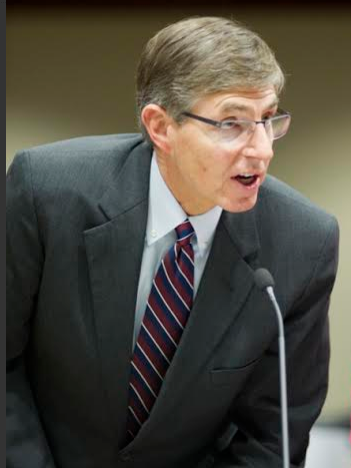 I’ve written before about Gearhart’s poor PR efforts in this ongoing controversy. Chief among them has been his long-running prickly relationship with the state’s largest news outlet, the Arkansas Democrat-Gazette. It goes beyond Advancement to Gearhart’s ill-advised decisions to demean the editorial page in personal op-eds on other topics. I didn’t think he was necessarily off-base in his opinions, but it threw an editorial-writing mule into a briar patch. The newspaper’s persistent pursuit of the Advancement story, broken by Arkansas Business and touched on some by the Arkansas Blog, really undid him, however.

John Diamond prepared a packet of information, including e-mails, about Gearhart’s apparent decision to stop co-operating with the D-G. Diamond thought it was a bad move. Saying “no comment” is like holding a trench coat over your head as you leave a courthouse, Diamond said. He said Gearhart also wanted to set up a webpage highlighting D-G FOI requests, but not those by others. He described new Advancement boss Chris Wyrick’s resistance to his plan for a comprehensive response to a major FOI request. Diamond’s report is lengthy and fact-filled, but all the more persuasive for all his recall of details and production of specific e-mails. Crimes? I don’t know. But I do agree with one of Diamond’s summary sentences: “A credibility gap exists and it’s damaging to the university and the state.”

We’ll  have more later. It seems likely to last a while.