The article starts with talk of gridlock and dysfunction. 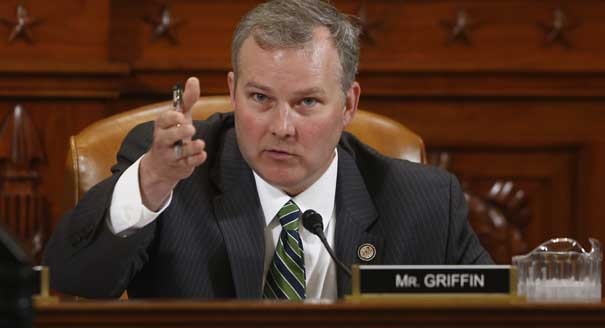 Griffin disputes the notion that hearty bipartisanship once existed.

They just have a different label. People love to say: You used to hang out with those people when they were Democrats but now you don’t because they don’t exist. But the person you are hanging out with has basically the same views, and they’re from that district, they’re just Republican. So, some of this is nomenclature only. You took a conservative or a relatively conservative Southern Democrat from a decade ago that you used to hang out with, right? And you replaced them with a Republican.

And so, you’re looking around going, “Well, I don’t hang out with any Democrats.” Well yeah, but you hang out with the guy that took that seat. So, you’re changing the label, but it’s the same views. I mean, I was never going to be hanging out with [liberal California Democrat] Henry Waxman. But I think we often overstate the role of the party in that. I’m in the gym every morning, and have lockers by Democrats. You know, I don’t ask person X or person Y to go out to dinner. Not because they’re bad people—I just have very little in common with them.

Fact: A decade ago Arkansas’s 2nd District was represented by Vic Snyder. No resemblance to Griffin. You wonder what it is Tim Griffin doesn’t have in common with Democrats. Milk of human kindness? He claims, nonetheless, a kinship with old Southern Democrats. Maybe he’s thinking back more than a decade, perhaps to Strom Thurmond. Griffin after all did participate in the Bush effort to disfranchise black voters in Florida.

Griffin complains about the lack of a deliberative process in committee and government by crisis and in the inability to get things done, or as he put it, “fix things.” But he added:

None of this is by any means the primary reason that I’m leaving. I have a three-year-old and a six-year-old. When I was elected, I had a newborn and a three-year-old. And, when I got elected, I loved ‘em, I missed ‘em, but they didn’t really fully comprehend me being gone—with all due respect to me. Now, I’m missing stuff. And my wife reminded me that I’ve missed all three of my boy’s birthdays. It’s not about being away only—I’m always going to travel. It’s about the lack of flexibility, right? You can’t say, well, I can’t be there that day, how about this day? You can’t schedule around. And so, when you’re weighing that, you certainly say: “Is anything going to change with this president?”

Got it. Family man. But let’s blame Obama, too.  He elaborated

And let me say this—in defense of being able to stop stuff. There’s a lot of people—you hear a lot about gridlock and things not moving. There are a lot of people who wish there would have been just a modicum of gridlock when Obamacare was voted on. And would have stopped it. Or Dodd-Frank. And so, I think that there are two sides to this. We emphasize what comes out of the Congress and becomes law, but who knows how many things that have been stopped that would have become law that we would be dealing with if we didn’t control the House.

Griffin said voters could have given both houses to one party, but chose not to do so. (He neglects to mention how partisan gerrymandering by Republicans produced a majority GOP House in a country where the majority of votes went to Democrats in House elections.)

Griffin did offer some criticism on his side of the aisle, of independent groups such as Heritage Action. He said it did nonsensical things.

I’ll have people who are for a government shutdown calling me and saying, “Hey I’m hearing the National Guard members might not get their pay.” I’m like, “Well, let me just clarify something for you here: You cannot oppose all of these bills and have these people that you want to help get their pay. You have to vote for the omnibus to fund the National Guard members. There are incompatible goals that you have.” They’re like, “Well, no. You can do this and this” [because that’s what they heard from Heritage Action or some other group]. Well yes, in the land of gnomes and fairies and glitter and fantasy. But the reality is there is no real-life alternative to the bill that we’re gonna vote on…. Some of these guys are just ridiculous.

Griffin styled himself as more pragmatic.

One of the most conservative principles is: You get what you pay for. And whether we’re having a debate or not, American people pay for their government with their taxes. People going on a vacation want their visas. People want this on time, they want that on time—regardless of the debates. So I decided I think the core conservative argument here is we’re charging the American people for their government. And, yes we need to make all sorts of changes. But, at a minimum, we must continue to give them what we’re taking their money for.

In the end, he defended Congress. He acknowledged its low standing in the polls:

But I can tell you, looking around the conference—these are some good people, and if they were all living back in my district, I would hang out with them. I wish the American people could have a window on some of these discussions and how sincere and thoughtful these people are in such stark contrast to “House of Cards” ….

Given earlier comments, I’m not sure he’s talking about Democrats.