The Times’ Observer, David Koon, my playground expert, believes the slide that burned was an updated version of a rocket slide that lacked friendlier plastic parts. He writes:

The old one was aluminum, steel and lead paint masterpiece. Many a tooth was chipped on that one, I guarantee. It would have taken the thrust from a real Atlas rocket to burn that baby.

When son Sam was three, when the original rocket slide was still up, we went over to Burns Park one day and nothing doing but he had to go down the spiral slide (the one that wraps around the USA rocket in the photo below). That sucker was up there… two stories or more, and the slide had been polished to a mirror sheen by a million Garanimals-clad asses over 40 years. Lisa got at the top, I got at the bottom, and he went for it.

When Sam came down, he was just a blur with his legs over his head. When he hit the bottom, I literally had to catch him to keep him from shooting off into the gravel. He was clearly freaked, with his hair all sticking up crazy and his eyes big as saucers. I said: “Wanna go again?” and he said: “NO WAY!” 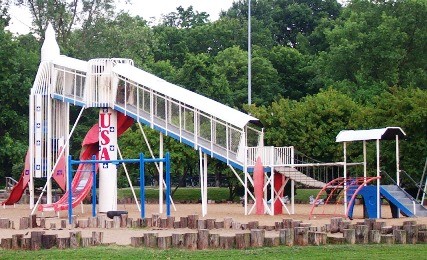