* ALL OR NOTHING: Sen. Michael Lamoureux announced on Twitter today that it will be simple when it comes to renewing the private option:

All Medicaid funding will be voted on in one vote on one appropriation bill. There is not an opportunity to vote for some and against rest. 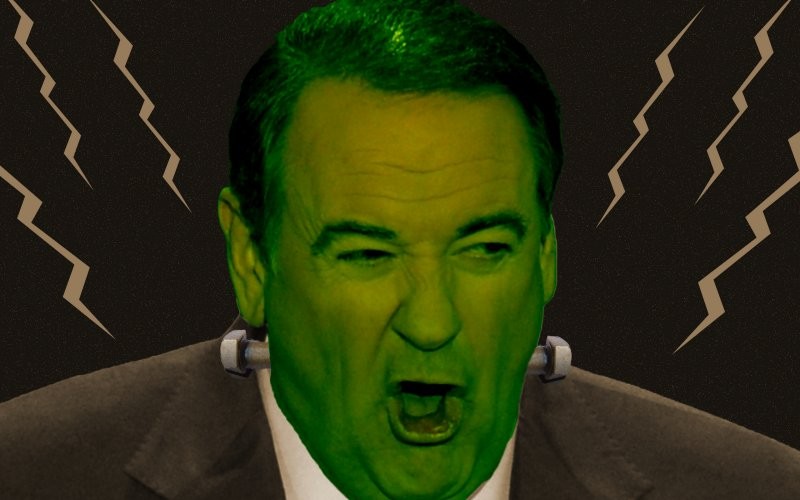 * THROWDOWN TME ON MIKE HUCKABEE: The results keep piling up. Mike Huckabee can only spin his “libido” nonsense with the blindest of true believers. Latest quotable: “Every year, this bilious fuckwit does an even poorer job of concealing how hateful he really is.”

It comes from James Poulos on Daily Beast, which illustrated his Huckenstein theme with the above illustration.

* KEYSTONE PIPELINE ADVANCES: The State Department has found no significant reasons to object to the route of the Keystone XL pipeline to pump tar sands from Canada through a sensitive Nebraska aquifer to Texas refiners for processing of products to ship overseas. This will undoubtedly please Reps. Tim Griffin and Tom Cotton, major Keyston proponents. I think as a show of good will and faith in the line that they should offer up the Lake Maumelle watershed as an alternate route to avoid unhappy landowners in Texas and Nebraska. What could go wrong? Sen. Mark Pryor might join the Arkansas route, too. He issued a statement today concluding: “Let’s build the Keystone Pipeline so we can ensure our future energy security and create jobs here at home.” It’s mostly creating jobs in Canada and Texas to ship product to China, but close enough.

* THEY’LL SAY ANYTHING TO BEAT MARK PRYOR: Tactics include Republican oppo research taking an old Mark Pryor clip and portraying it as a contemporary comment on President Obama’s recent State of the Union speech. And speaking of lying liars: Repubs caught fudging a helluva lot worse than Wendy Davis on its SOTU Obamacare ‘victim’ story.

* FARMER MARK PRYOR: Speaking of Sen. Pryor, he’ll be joined by farmers at the state Capitiol at 1 p.m. tomorrow to highlight Republican opponent Tom Cotton’s votes against the farm bill. Cotton hates the spending on food stamps. The map below might be instructive on the number of working poor in Arkansas. It illustrates that fully a quarter of Arkansans tax filers qualify for the earned income tax credit. That is, they work, but make so little they get a rebate from their payroll taxes. And the number is rising. Many of them qualify for nutrition assistance. Far too many for Tom Cotton.