The landmark Majestic Hotel in Hot Springs, vacant since 2006 and recently boarded up, caught fire Thursday night and kept burning as dozens of firefighters worked to extinguish the flames. Coverage of the spectacular fire kindled memories among thousands of Arkansans from the resort hotel’s happier days. The fire was still burnig Friday morning.

The first night I spent in Arkansas was in 1958, on a family trip. We were thrilled to stay in the new Lanai section of the hotel, with its swimming pool. Don’t ask why, but I still remember a cold Pepsi, in a swirled glass bottle, that I had beside the pool. I also remember the Dutch Treat restaurant, with its handsome wooden booths, that occupied ground floor space in the oldest part of the hotel, where the fire began last night. And I also remember the sundry store. What was a sundry, anyway?, I wondered at the age of 8.

The property had begun languishing long before it was closed. A variety of ideas for saving the buildings, or portions of them, included a boutique hotel idea and conversion to apartments. The old portion of the hotel included a bath house.

Reports this morning, at 6 a.m., said flames were still licking at the back side of the hotel building. Streets around the hotel will be closed as firemen continue their work. They’ve been prevented from entering the building for fear the structure, which dates back to the early 20th century, is unstable.

UPDATE: The nearby Arkansas Schools for Mathematics, Sciences and the Arts was forced to close until 2 p.m. Monday on account of the fire. 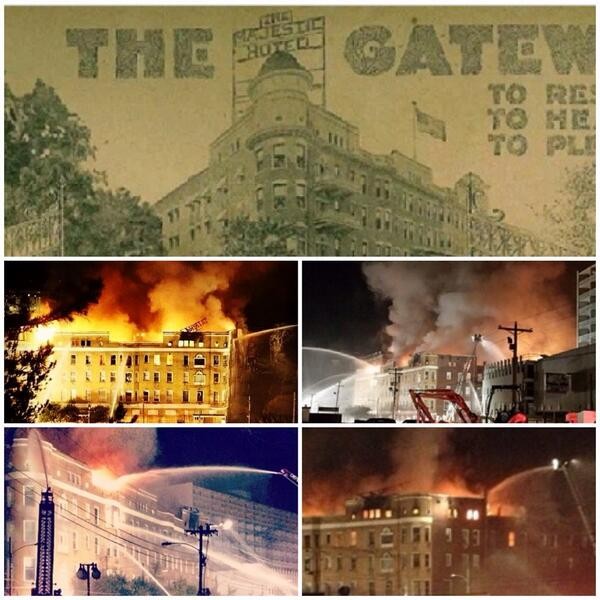