Blue Hog Report has just posted an extensive report on a story I expected today. In it, he cites voluminous web comments that include personal information pointing toward Circuit Judge Mike Maggio, a candidate for Arkansas Court of Appeals, as the source. The comments range from the sharply political or sexual in nature to comments about the confidential adoption proceeding of actress Charlize Theron.

The spicy comments — under the name “geauxjudge” on tiger droppings.com, a message board popular with LSU fans (Maggio’s daughter plays golf there) — have an obvious bearing on the commenter’s judiciousness as a judge. But there’s some question about whether comments made under a different name aren’t protected on a judge’s part as free speech. But revealing information about a confidential adoption proceeding is another matter.

Blue Hog isn’t the first to be aware of this. I sent an inquiry to the Judicial Discipline and Disability Commission, which regulates judicial conduct. I got this response, which indicates a review was already underway.

The JDDC is aware of the allegations that were reported today. Under Rule 7C(3) I can confirm the pendency of an investigation by this agency. The judge will have full due process rights during our litigation of this matter. This office will not have further public statement until the case concludes with dismissal, agreed resolution or public charges.

UPDATE: Maggio has released no statement today, but apparently will release a statement tomorrow. Based on what I’ve been told, it appears that, should he choose to stay in the race, he’ll do so without his current campaign consultant.

Theron adopted her son, Jackson, in 2012 but news articles never revealed where the adoption took place. Early reports said the child might have come from South Africa, but she later said the child was born in America. She and Jackson appear frequently in tabloid press coverage.

Maggio is a candidate for state Court of Appeals, the state’s intermediate appellate court. He is opposed by Bart Virden of Morrilton.

He brings a record already marked by a past discipline by the state Ethics Commission for expenditure of campaign money on personal expenses. He was also written up by the Conway Log Cabin Democrat for flashing a badge at a state trooper during a speeding stop. And he’s had a variety of financial mishaps — tax liens and a mortgage in arrears. We’ve focused on him more recently for a remarkable write-down of a unanimous jury verdict in a nursing home malpractice case. He said he was shocked by the $5 million verdict for pain and suffering of a woman left untreated by the nursing home and reduced the award to $1 million. He’s received a third of the money he’s raised for his campaign so far from nursing homes, with help from UCA lobbyist Gilbert Baker, who contends he’s working on his own time as a bundler of money for conservative judicial candidates and Republican legislative candidates.

Comments by geauxjudge on women’s role and sex are spicy. (Example: Women like a big “bulge” in the pants or a big wallet, but either one will do.) His derogatory joking remarks about Arkansas as a place predisposed to incest would anger some. But, again, other than calling himself a judge and referring to his judicial duties often, the others on the board don’t know precisely who the commenter might be.

The post on Theron’s adoption below. As Blue Hog notes, the timing is right. The adoption first was revealed in the press in March 2012.

Geauxjudge’s posts went on to say Theron had adopted a black child. 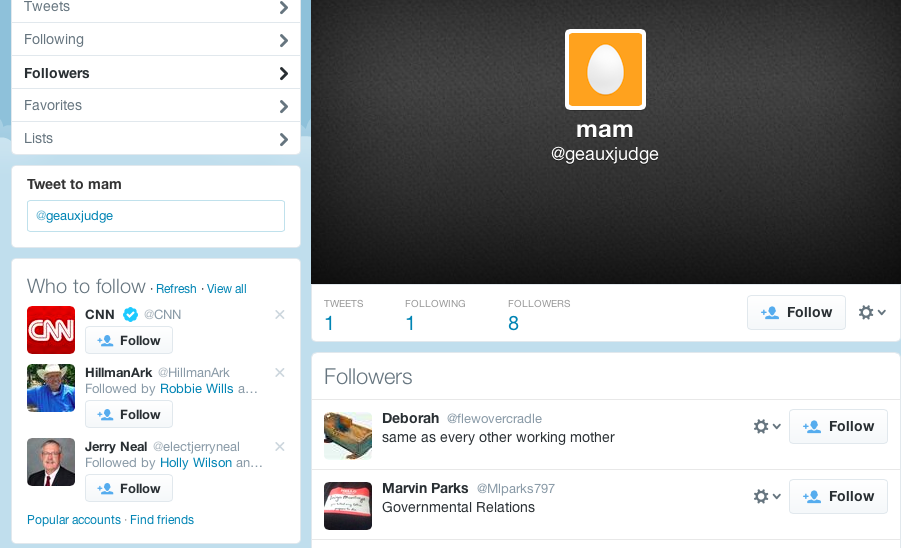