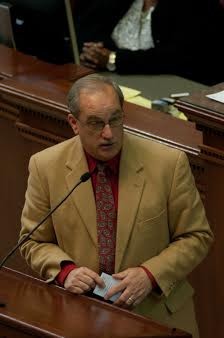 The Arkansas House today approved, on its fifth vote, on the federally funded expansion of Medicaid under President Obama’s Affordable Care Act. Needing 75 of the 100 House votes, it passed 76-24.

Rep. Kim Hammer of Benton spoke for the bill. His switch was an early sign approval might be in the offing, but opponents were offering stem-winding speeches against the dangers of government health care. He said he remained opposed to the concept. And he said he’d vote it down in January if it didn’t live up to proponents’ promises. But he indicated it would hurt people to take it away. But his vote brought the previous count of 73 supporters to 74. In the final vote, two previous supporters of the original legislation who’d been nays this session — Reps. Les Carnine and Mary Lou Slinkard — joined the winning margin.

The vote of 76 has some political importance. It prevents one of the final ayes from standing alone as the deciding vote on Obamacare. Ask former Sen. Blanche Lincoln how that feels.

The Medicaid expansion extends coverage to working poor making between 100 and 138 percent of the federal poverty level. The Arkansas version of expansion sends those newly qualified to private insurance companies, among other tweaks.

Opponents have largely built their resistance to fighting the additional federal expenditures required by the national legislation. Failure to approve the legislation in Arkansas wouldn’t mean the money wouldn’t be spent elsewhere, but it would have deprived tens of thousands of Arkansans of coverage. More than 125,000 are already on the program.

Opponents had already won an amendment to prohibit advertising or otherwise promoting the program. In another potential concession, the administration had agreed to a rule change that would limit the enrollment period for the private insurance each year. This would have created a program that couldn’t be advertised with a shortened enrollment period that also couldn’t be advertised beyond no-cost posting in government offices. Earlier amendments included a requirement of co-pays for even the poorest participants. It’s unclear if that offer remains a part of the final workout. As it turned out, the new idea on limited enrollment period wasn’t part of the deal, Rep. John Burris tells me. The earlier concessions remain, but no more.

Finally, at 2:30 p.m., the bill was called up. Rep. Joe Farrer repeated opponents’ questions about future funding when the state must pick up 5 percent of the cost in three years, ultimately rising to 10 percent. Rep. Randy Alexander also insisted the legislature could come up with a better plan at a lower cost. He argued Americans were no longer free people under legislation with the mandates of the federal legislation, such as required coverage for birth control. Rep. John Hutchison, facing a Tea Party primary opponent, reiterated opposition. “If you don’t stand for something, you’ll fall for anything,” he said. Rep. John Payton, who ran for office almost exclusively against Obamacare and abortion, joined the naysayers. “Only an independent state can be free,” he said. He suggested that government-provided health care works against personal independence and thus freedom.

Rep. Charlie Collins, a supporter, gave the obligatory lament  about the “horrible’ Affordable Care Act. and the president’s “take it or leave it” approach. He pitched the private option as a better alternative.

Before the House began work in the afternoon, Sen. Johnny Key won approval of special language in the Joint Budget subcommittee’s morning meeting to place future state winnings from a pending lawsuit — I’m uncertain if it’s the big Medicaid drug fraud suit or another — into a trust fund to cover future state obligations under Medicaid expansion after an initial three-year period of full federal payment ends. It wasn’t mentioned during the meeting, but it sounds like a piece that could be attractive to those fearful of the size of future state obligations. 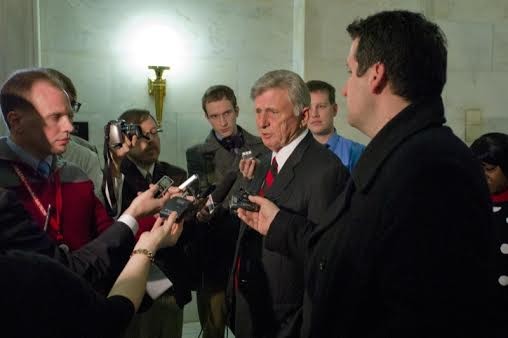