Griffin was introduced by his own mother, Betty Hightower, a school teacher and administrator with over 30 years experience. Hightower said that when she learned her son was gay, she was fearful that he’d be treated unfairly because of his sexual orientation. “I don’t have that fear anymore,” Hightower said.

Griffin said the HRC had heard about the censorship yesterday, and had put together the press conference and a petition drive in response. Griffin, an Arkansas native, said that as a child he’d briefly attended an elementary school in Sheridan. Administrators in Sheridan, he said, are discriminating against Ellis for “how he is, how he was born, and how God made him.” He went on to say that he was disappointed that in 2014, “we’re still having this conversation.”

“This discriminatory exclusion by Sheridan High School administrators has nothing to do with Arkansas values,” Griffin said. “Arkansans are better than this.” 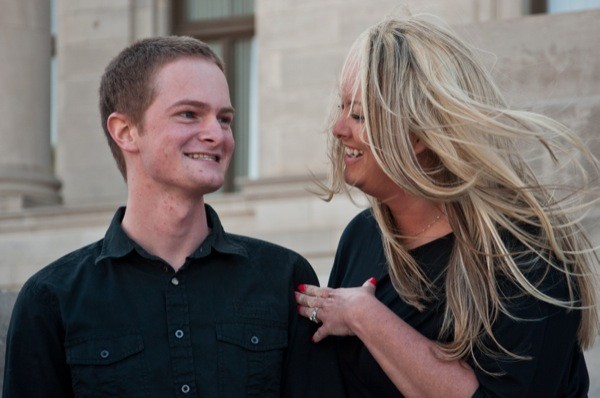 Griffin said that while gay children struggle with bullies, in this case Principal Rodney Williams and Superintendent Brenda Haynes are the bullies. He called Ellis’ decision to talk about the discrimination selfless, something that would prevent it from happening to others. Ellis is, Griffin said, “Arkansas’s profile in courage.”

After the introduction by Griffin, Taylor Ellis stepped to the microphone. He said that he came out two years ago, recently joined the Arkansas National Guard, and is currently looking for a job to help pay his way through college. “Yes, I’m gay,” he said. “It’s not something something I’m ashamed of. In fact, I’m proud of who I am. That’s why I can’t understand why my school is trying to force me back into the closet.”

He said that when he was asked by a friend to be the subject of a profile in the Sheridan High School yearbook, he was excited, thinking it would be a good memory to look at years down the road. He was disappointed when he was told that school officials decided it was “too personal” and would be kept out. “I think that’s wrong,” Ellis said. “There’s nothing wrong with being gay. My school should be supportive of me instead of trying to keep that part of me hidden.” Ellis said he loves school, and wants to be a teacher when he grows up, but feels like his school doesn’t want him to be proud of being gay.

“I’m not looking for anything special,” Ellis said. “I just don’t want to feel like I’m not good enough for the yearbook because I’m gay.”