A new Kaiser Health Tracking Poll out today continues to show that most of the provisions of the Affordable Care Act enjoy strong popularity, even as a plurality of Americans say they have an unfavorable view of the federal health care law overall. The individual mandate — the penalty applied to people who don’t have health insurance, remains unpopular. But the rest of the law’s provisions enjoy broad support:

The numbers for Medicaid expansion are striking: 74 percent support, including 69 percent of independents and 62 percent of Republicans. Obviously, as we’ve seen in Arkansas, a poll like this is largely dependent on framing. The private option is popular, but call it Obamacare and the numbers tank. (Here was the way Kaiser framed the Medicaid expansion favorability question: “The law gives states the option of expanding their existing Medicaid program to cover more low-income, uninsured adults.”) Opponents of Medicaid expansion will continue to try hammering the anti-Obamacare message, but the tides may be turning at this point — the political dynamic may become less about Obama and more about what people (not to mention various interests within states, such as hospitals) have to gain from expansion (or have to lose if it’s taken away). Many Republican lawmakers and politicians are finding themselves in a tricky dance on this issue, exemplified by Asa Hutchinson‘s nonsensical hedging on the private option.

Many on the left are trumpeting another finding, suggesting that many people are tired of hashing out the health care law, and that Republicans may be making a strategic mistake with their all-Obamacare-all-the-time strategy in the 2014 elections. 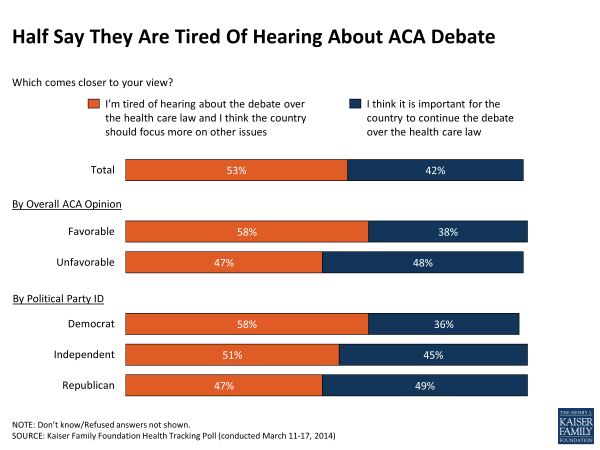 Well, maybe. The “Obamacare bad” message still plays pretty well in Arkansas. But hey, perhaps by November being tired of hearing about the health care debate is something that Democrats and Republicans will be able to agree on.

The other big finding to note is that 59 percent of those surveyed either want Congress to keep the law and work to improve it or just keep it as is, while just 29 percent want to repeal it or repeal and replace with a Republican alternative. Another poll earlier this month found 71 percent wanting to keep the law (54 percent saying they want lawmakers to work on fixing it, 17 percent saying they want the law to remain as is) and just 28 percent wanting to eliminate it.

Obamacare still might not be popular (though the Kaiser poll found that favorability of the law is ticking up) but repealing Obamacare is very unpopular. Now remember, these are national surveys. In Arkansas, the fight to hate Obamacare more than the other guy will continue to dominate elections for the time being. Sign me up for “tired of hearing about” it.