That’s right, more bad weather today, causing flooding at some intersections and big balls of hail, so be careful heading home. But first, a few tidbits:

* Vladimir Putin got on the horn today to President Obama to suggest a diplomatic meeting to resolve the crisis in the Ukraine.

*On the other hand, home sales are up by 12 percent over 2013, though prices are down by 3 percent, reports the Arkansas Realtors Association.

* ERC Companies of Barling (Fort Smith) plan to break ground next week on Thrive, a three-story 62-unit apartment/retail complex in downtown Bentonville off the square in what is now being referred to as the arts district. The land was previously owned by the city.

* Jonesboro lawyers are worried that there aren’t enough public defenders to handle the huge caseload there, the Jonesboro Sun reports in a story behind its paywall that you can read a summary of here.

And about that flooding: Here’s a shot from Forbidden Hillcrest of the intersection of Markham and Van Buren. 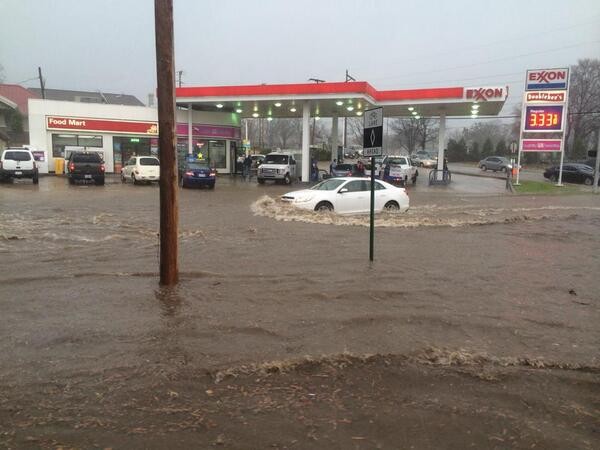