The City of Little Rock’s decision to cut down 15 oak trees on Main Street as part of a water project a few days ago had downtown developers mystified. The city left standing unsightly three-foot stumps along the 100 and 200 block of Main, and Jimmy Moses and Rett Tucker called Mayor Stodola over the weekend to ask, WTF? 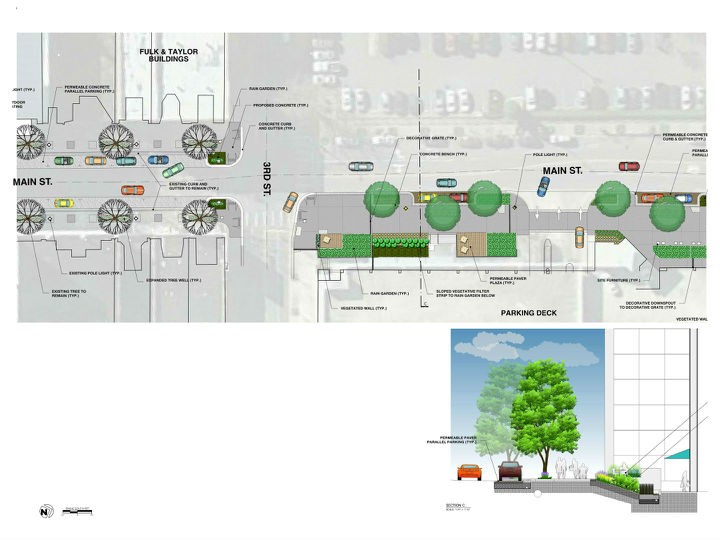 Today the city clarified the deforestation with this press release and the images above and to the right:

LITTLE ROCK—As part of the award-winning Creative Corridor design, construction began recently on improved landscaping and water systems along several blocks of North Main Street in Little Rock. In order to improve the existing tree canopies, some trees along the street will be replaced and other more appropriate mature trees will be added along with improved landscaping.

According to the original designers, the University of Arkansas Community Design Center, the trees along the north part of Main Street are at the end of their life expectancy and the tree roots in many places are causing the sidewalk to buckle creating a safety hazard. Moreover, the growth of existing trees has been stunted because of the conditions in which they were planted. The City consulted several arborist who believe many of the existing trees will not live though the new sidewalk construction. Replacement trees will be better suited to the new environment which will feature multiple water demonstration projects as part of the low impact development construction. The new trees will be approximately 6 inches in diameter and 20 to 22 feet tall. In addition to new trees, other landscaping is planned within each block.

“Once completed, Main Street will be fashioned with beautiful landscape design along with new, more appropriate trees for urban development,” said Mike Hood, Civil Engineering Manager for the City, who is supervising the construction project. “Some changes will be seen during construction, but the end product will be beautiful.”

The following locations will have new trees:

500 Block of Main Street: 19 Allee Elm trees for the west side of the street and eight Streetspire Oak for the east side.

No other blocks of Main will have any construction or changes as a result of this project.

Apparently, folks with the city assumed that because a public hearing had been held, all knew that the trees were coming down.