We poked a little fun at Fox News yesterday for a ridiculous bar graph on Obamacare enrollment. Well, hey, they admitted the error of their ways, Talking Points Memo reports.

“Yesterday about this time you might have seen a graphic on the Obamacare sign-up numbers. Here is what it should have looked like,” host Bill Hemmer said. “On the left it shows the 6 million sign-ups reported from the administration as of March 27 compared to the target number of 7 million plus. That was our mistake, correction noted.”

But Hemmer still failed to mention that CBO had revised its enrollment projection down from 7 million to 6 million after HealthCare.gov’s glitchy rollout. In any case, Obamacare sign-ups were on track to hit that 7 million mark as the clock wound down on the open enrollment period Monday night.

Here’s the buffoonish scale of their original graphic:

And the corrected version: 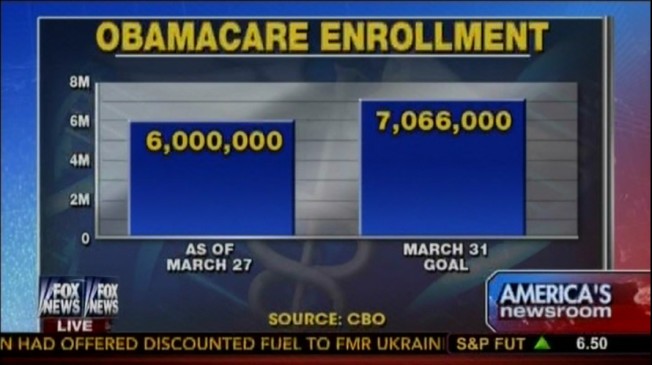 Score one for Media Matters. The real question is what sort of cockamamy graph Fox will come up with now that the administration appears to have met the 7 million target after all, and the old talking point that enrollment has been a disaster has crumbled. Can’t wait!