Through April 6, 41,402 Arkansans have purchased plans on the Arkansas Health Insurance Marketplace, the new marketplace created by Obamacare, according to information released yesterday by the Arkansas Insurance Department (see county  by county map above). As in the rest of the country, Arkansas saw a surge in enrollment recently, with more than 7,800 people signing up in the last two weeks. But while national enrollment in the marketplaces across the country hit initial projections, Arkansas will fall well short.

The deadline for open enrollment was technically March 31, but  the Obama administration granted an extension that in practice gives people more time to sign up. This number may tick up slightly in the coming weeks as folks continue to sign up. Administration officials have not yet given an official final deadline.

Enrollment remains well below targets. Prior to the Affordable Care Act, around 250,000 people were estimated to be uninsured and make more than 138 percent of the federal poverty level, the population that the Marketplace is intended to reach. While no one predicted that all of them would sign up, thus far the 41,402 enrollees represent just 16.6 percent of that eligible population (and some of the Markteplace enrollees may have been previously insured). Heading in to open enrollment, AID set a target of 160,000, though this was inclusive of the Small Business Health Options Program, which ended up getting delayed significantly. Marketplace Director Cindy Crone told me that projections were lowered to around 50,000 once the initial problems with healthcare.gov became clear. Any way you cut it, the number of people purchasing plans on the Marketplace is less than what was once projected. While the private option has been a smashing success at reducing the number of uninsured people below 138 pecent of FPL, the Marketplace in Arkansas above that line is so far falling short of the health care law’s goals in terms of getting people covered. See the map below, which shows the percentage of people eligible for the Marketplace who have signed up.

There are some big caveats — because the state insurance department allowed plans not compliant with the ACA to continue through fall of 2017, there are likely tens of thousands of people on private plans outside of the Marketplace that may eventually transition in. And of course, the state blocked the federal money intended for outreach just as enrollment began, which didn’t help. See this post for more context.

I’ll have more on this later, but the private option may well end up representing 75 percent or more of the people covered in the Marketplace. A major policy victory for the private option has been stabilizing the Marketplace in its first year. While Obamacare opponents might be unhappy about this for partisan or ideological reasons, this is a good thing for any Arkansan shopping on the individual, non-group market. A successful Marketplace with strong enrollment means lower premiums in the long run, more carriers in the state, and more choices for consumers. 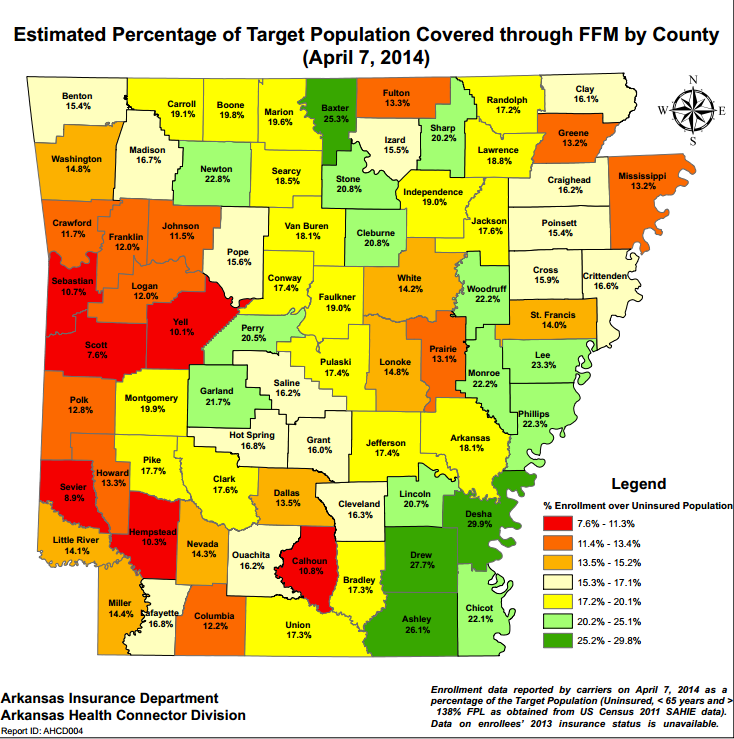