President Obama announced today that 8 million people have signed up for the marketplaces created by the Affordable Care Act, including the Arkansas Health Insurance Marketplace (millions more have gained coverage via Medicaid expansion or via the law’s provision allowing people under the age of 26 to stay on their parents’ plan). Around 5 million more have signed up in plans that meet Obamacare’s standards outside of the Obamacare marketplaces.

The Congressional Budget Office originally projected that 7 million would sign up on the marketplaces. That seemed impossible late last year after the disastrous rollout of healthcare.gov (though in retrospect, that disaster may turn out to be a blip in the grand scheme of things). Many of the law’s critics gleefully claimed that the law was doomed to collapse or that nobody wanted the products on offer. Many open questions about the law remain, but the trainwreck predictions were wrong. Thanks to a massive late surge — with 3.7 million signups between March 1 and April 15 — enrollment in the marketplaces outpaced the original projection, hitting 8 million.

Sarah Kliff over at vox.com summarizes the news thusly: “There’s a very simple reason that Obamacare hit 8 million sign-ups: Being uninsured is horrible.”

“This thing is working,” Obama said in a speech today, adding that Democrats should “forcefully defend and be proud of” the law. Said Obama, “The repeal debate is and should be over.” Well, that sounds like wishful thinking. Someone tell Rep. Tom Cotton!

On Fox News, Ed Henry said, “I have to admit the story on health care has gotten better.”

As for the age mix, you may have heard that about 40 percent of the population eligible for coverage in the marketplaces is between the ages of 18 and 34. That’s true and, obviously, 28 percent is a lot less than 40 percent. The worry has always been that older and sicker people would sign up in unusually high numbers, forcing insurers to raise their prices next year and beyond.

But insurance companies didn’t expect young people to sign up in proportion to their numbers in the population. They knew participation would be a bit lower and they set premiums accordingly. Only company officials know exactly what they were projecting—that’s proprietary information—but one good metric is the signup rate in Massachusetts, in 2007, when that state had open enrollment for its version of the same reforms. According to information provided by Jonathan Gruber, the MIT economist and reform architect, 28.3 percent of Massachusetts enrollees were ages 19 to 34, a comparable age group.

And Obamacare’s age mix, Cohn points out, looks very close to the first year of Massachusetts: 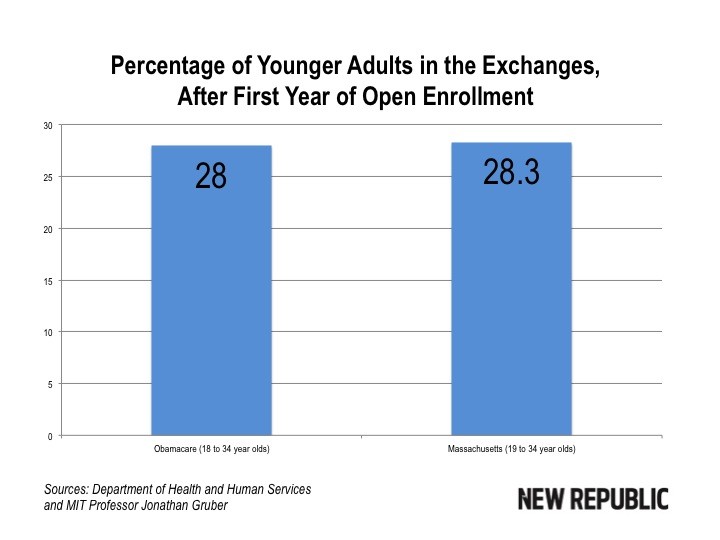 All of the usual caveats apply. As I said when Obamacare hit 7 million enrollees: Despite its symbolic power, in the grand scheme of things, the 8 million number isn’t very meaningful. The CBO’s original projection of 7 million was its best guess on how enrollment would turn out — it was never really a target with any tie to the functionality or efficacy of the law. How healthy the mix of people signing up is will ultimately matter more in terms of the long-term sustainability of the marketplaces. Moreover, the big national numbers aren’t the real story. Each marketplace in each state (and the District of Columbia) has its own population. The size of each — and more importantly, the mix in terms of health — is very different state by state. The implementation of Obamacare is often reported as one big story, but it’s really 51 stories. For example, here in Arkansas, enrollment has lagged on the Arkansas Health Insurance Marketplace, but the state should have a robust population on the Marketplace thanks to the unique private option policy, which will put more than 100,000 Medicaid beneficiaries into the market. Those are the sorts of state-specific nuances that the big headline number cannot capture.

Meanwhile, there are fair questions about the 8 million: How many were previously insured? How many have paid their first month’s premium? People that never pay their premium won’t be covered, though even if 20 percent never pay, that would still leave 6.4 million enrollees. Finally, keep in mind that the CBO’s estimates were meant to be a snapshot. Some people will leave the Marketplace but others will join it later in the year even though open enrollment is over (people who have a big life change such as losing their employer-sponsored insurance can still sign up after the deadline).

Still, the big number does matter, particularly given where things stood five months ago. Particularly given the loud and confident certainty of the law’s opponents that the whole thing was collapsing. In fact, people are signing up and getting covered. The law is working as intended. More and more evidence is coming in that the rate of uninsurance in this country is falling — because of Obamacare.

“Conservatives spent years warning that Obamacare would be a disaster and, from late fall through mid-winter, those arguments sounded convincing,” Cohn writes. “Not anymore.”

This means the critics’ daily predictions of ruin were wrong, as usual. People signed up, both those who need care now and those who know they might need care tomorrow. There’s still much to do to make the whole system sustainable for all of us, but these numbers are definitely a major step in the right direction.

[T]he benefits of Obamacare, for all its imperfections, are immense. Millions of people who lived extremely anxious lives now have far more security than before. Compared with those benefits, the complaints of some already insured people that they have less choice of doctors than before, or that they’re no longer allowed to retain minimalist plans, look like whining.