Sen. Bryan King and Rep. Joe Farrer held a press conference at the Capitol today to reiterate the complaints about the private option they’ve made since the policy’s implementation (and dating back to the debates in the legislature to pass and re-authorize the private option), and to call for a new set of cost projections to be developed by a company other than Optumas, the actuarial firm that contracted with the Department of Human Services to develop cost estimates.

King and Farrer focused on the per-person, per-month costs of the private option thus far, which have been approximately 4 percent higher than what Optumas projected in August for the state’s waiver application, but significantly higher — by $45 to $60 a month, approximately 12 percent higher — than the initial projection Optumas made last March as the legislature debated the private option (for everything you need to know about all these projections, see here).

All of this has gotten local and national press coverage, but King said he “feels the message is not getting out there” so he held up a laminated sign that said “over budget $100,000,000.” King’s calculation comes from taking the actual per-person costs so far and comparing them to that original March projection, then extrapolating out over a full year. If we use the initial Optumas projection as a baseline, he’s right: the gross costs to the feds would be $100-250 million more per year than what Optumas projected in March based on actual costs so far. Meanwhile, if we use the cost numbers the feds themselves set in the approval of the private option, the actual costs are less than 3 percent higher. That still adds up: Most projections put the gross federal costs of the Arkansas coverage expansion at around $20 billion over ten years; coming in 2.7 percent higher would be $600 million over ten years. (Wonky note: net costs to the feds of expansion versus no expansion are a bit lower because without expansion, more people would qualify for subsidies on the healthcare marketplace. Optumas did not include this factor.)

Of course, as a federal budgetary matter, ten-year expansion costs coming in at $20.6 billion (or even $22.5 billion) instead of $20 billion wouldn’t be particularly worrisome — that’s less than a rounding error in the overall federal budget picture. (The big question for federal costs, particularly if other states choose to pursue a private option, is the cost compared to traditional Medicaid expansion). But King and Farrer point out that starting in 2017, Arkansas has to start chipping in for 5 percent of the cost, and that will go up to 10 percent by 2020 and beyond. They expressed concern that once the state is on the hook, Arkansas could face $10 to $20 million a year in additional costs beyond what Optumas projected in March.

One thing there’s no doubt about: the state badly needs to do an updated projection of the overall cost impact of the private option on the state budget. Optumas updated their March per-person cost projection for the waiver application in August based on better data, and we now have better data still. There is also better information on revenue collected by the state via premium taxes on private option plans, and the state savings accrued from “transfer populations” — people covered under the private option at higher federal match rates than they would have been under existing Medicaid programs (the Optumas projection did not include the impact of pregnant women being covered by the private option instead of the pregnancy Medicaid program, estimated by DHS to save the state $20 million in fiscal year 2015 alone). There is no reason at this point to rely on projections made in March of 2013. Before the legislature meets next January, the state needs to produce a an up-to-date cost analysis of the private option’s impact on the state’s bottom line, both this year and going forward.

King and Farrer want someone other than Optumas doing that cost analysis. King didn’t have anyone specific in mind but said they would look for an independent consultant — “somebody that wasn’t involved in this [to] look at the financial part going forward.” According to King, the study would either have to be approved and funded by Legislative Audit (of which King is the chair) or Legislative Council.

Because Optumas was paid by DHS, King and Farrer questioned the objectivity of the firm. “If you have a dog in the fight, you may be influenced one way or the other,” Farrer said. (DHS officials counter that Optumas is an independent actuarial firm and said they have confidence in the work Optumas has produced.)

Of course…Farrer and King also have a major dog in the fight. They have been vehement opponents of the private option from the word go and are leading the fight to try to repeal the policy.

“The thing about that is, they’ve had their side,” King said. “Let’s let somebody from the other side…try and give a balanced view.”

“This would be a tool to justify why the private option is not good,” Farrer said. “Otpumas said [the state of Arkansas] is going to save hundreds of millions of dollars,” he said. He predicted that “if we come back with new numbers, people will see we’re actually going to lose money, not save it.”

Whether Optumas does a study, or the aginners bring in their own consultants — or both — it’s important that projections are transparent about methodology. I’ll have more on this in a subsequent post, but if Optumas contracts to update the projections, they need to do better on this front. To give one example, former state representative Dan Greenberg also spoke at today’s presser and raised concerns about the way Optumas projected the “woodwork” population (people signing up  who qualify under the old Medicaid eligibility rules). According to DHS officials, Optumas projected this number as being higher under a scenario in which the state doesn’t expand because of “eligibility creep” — historically, the Medicaid program has added categories of eligibility over time to cover more of the uninsured. If the state had refused the private option, Optumas assumed that would continue, adding more people under the old Medicaid match rates (at a higher cost to the state than the enhanced match rates of Medicaid expansion). This may be a plausible theory, but it is not clearly spelled out anywhere in Optumas’s public releases. State officials argue that the private option is a good fiscal deal for the state — that the revenues from state premium taxes and state taxes on the federal spending, plus savings from transfer populations and state spending on uncompensated care, mean that Arkansas will save money on net over the next decade from the private option, even though the state will start chipping in to help pay for coverage in 2017. They need to make that case as clearly and transparently as possible, including the actual data that is being accumulated in 2014.

What I haven’t mentioned here is that state officials will have some tools at their disposal to attempt to reduce costs in the coming years and that even this-year costs could turn out to be lower than what has been reported if there is an adjustment for medical loss ratio. It is not surprising that those who bitterly oppose the private option would like the state to turn back from the policy, but there is no reason to panic four months into a three-year federally funded experiment. (And by far the most important piece of data to project future costs — 2015 premiums — won’t be released until this summer.)

There’s also the matter of what is being paid for: coverage for 150,000 (and counting) Arkansans. You can read some of their stories in this week’s cover issue. The impact of the private option on the state budget is of course a crucial part of this debate. The impact on people like Tamara Williams is too.

I asked Farrer and King what would happen to those folks if they succeeded in repealing the private option.

“There’s a better plan,” Farrer said. Farrer often says this. However, despite the fact that we have been debating Medicaid expansion and the private option for well over a year, Farrer today again declined to say what this alternative plan is. Farrer said he has been working with a Medicaid expert and the unspecified alternative plan would cover all of the people currently covered by the private option. Given that, I thought it was curious that he had kept this plan a secret while the legislature narrowly re-authorized a policy that he loathes during a protracted political battle.

“We have to have a concrete ‘we’re not going to do the private option anymore’ and then we can commit to working to develop the [alternative] plan,” Farrer said.

It would be a shame if Farrer will only reveal the secret alternative plan to keep everyone covered if the legislature first kills the private option and kicks everyone off of their coverage. Hopefully he’ll reconsider. I eagerly await the details. Until then, King and Farrer need to be forthright about another big number: the 150,000 Arkansans who would lose their health insurance if the private option goes away.

***UPDATE: I spoke with Sen. David Sanders, one of the key Republican backers of the private option, who called today’s press conference “a bit of a political stunt aimed at capturing the headline that they and their supporters can take and put on a mail piece and slam people who are in elections right now who support the private option. All they’re trying to do is get a story they can put on a mail piece for Terry Rice and Scott Flippo. That’s all that was.” Republican primaries are in less than two weeks and the private option has been a big issue in a number of races, including the race between incumbent Sen. Bruce Holland and Rice, incumbent Sen. Bill Sample and challenger Jerry Neal, and Rep. John Buris and Flippo, vying for an open senate seat. Holland, Sample, and Burris voted for the private option.

That said, Sanders said it was important to create an updated cost analysis, though he added, “It’s all an academic exercise until the [2015] rates come out.” Fair point. 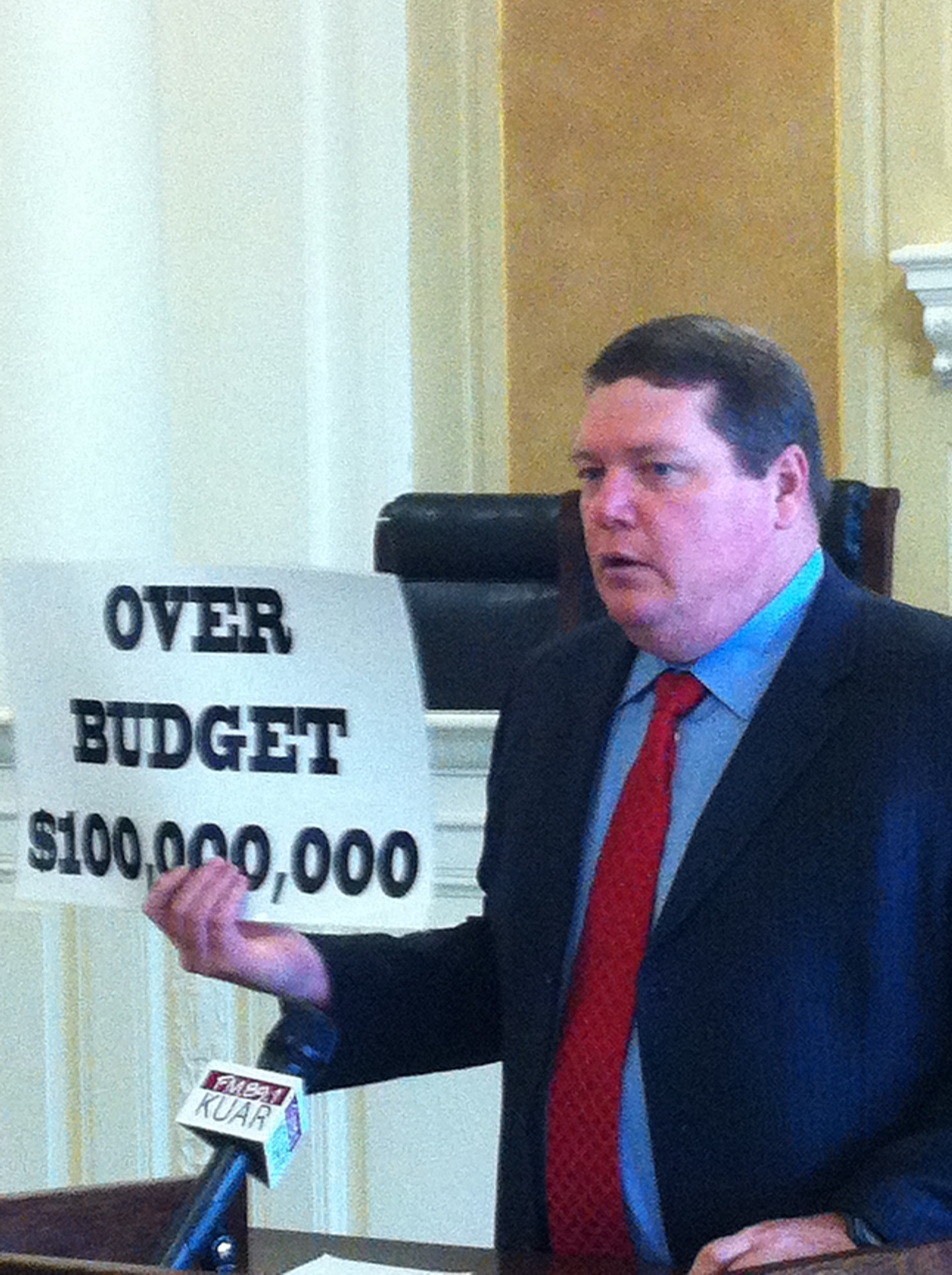