Marriage licenses will continue to be issued to same-sex couples in four counties in Arkansas at least until tomorrow. The Arkansas Supreme Court has responded to Attorney General Dustin McDaniel’s request of Judge Chris Piazza’s ruling overturning the same-sex marriage ban by giving plaintiffs until noon Tuesday to respond.

The Supreme Court sent this notice to attorneys:

The Supreme Court requests responses to the State Defendants-Appellants’ petition for emergency stay by noon tomorrow, May 13, 2014. A copy of the petition and partial record are attached for your convenience.

It is unclear how quickly the Supreme Court will rule. It normally issues opinions on Thursdays, but in extraordinary cases sometimes issues them immediately.

It’s been a busy day, particularly in Pulaski County. By late afternoon, more than 200 more same-sex couples had received marriage licenses in Arkansas, more than 150 in Pulaski County, where the line finally had died down by 2 p.m., and more than 80 in Washington County. KARK provided the following late-afternoon tally: 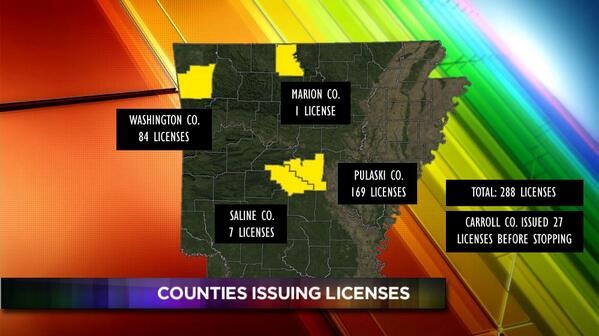 Pulaski Circuit Judge Chris Piazza struck down the state constitutional amendment and a 1997 statute banning same-sex marriage as courthouses closed Friday around 5 p.m. He did not enjoin enforcement of the old law. Nor did he stay his ruling, as some judges in other states have done. It’s not surprising. A judge who’s found an unconstitutional practice often won’t say, “It’s OK to keep being unconstitutional for a while.”

Faced with a crowd of couples seeking licenses, the western district of Carroll County in Eureka Springs, the only clerk’s office in the state open on Saturdays for marriage licenses, issued 15 licenses.

Hundreds are applying in Pulaski County today. Washington County, like Pulaski a defendant in the lawsuit, also is issuing licenses today, several dozen at last count. Marion County, not a defendant, has decided to issue them and has issued at least one today. Saline County, a defendant, initially wouldn’t accept same-sex couples, but later in the morning decided it would. None has applied yet.

Lonoke, White and Conway counties, despite being defendants in the Piazza case, have refused to issue licenses today to same-sex couples. They say they have legal advice to support this.

Carroll County, after opening to same-sex couples again this morning, changed course several hours later and stopped accepting such applications after about a dozen were issued. The local prosecutor issued this statement:

At a meeting Saturday organized by the Association of Arkansas Counties several attorneys laid out ways in which counties could refuse to follow Piazza’s ruling, particularly counties that were not defendants. But even in those counties, it was noted the lack of injunctive relief for the plaintiffs and “confusion” from the fact that though Piazza’s ruling was clear as to the illegality of preventing same-sex marriage, a number of other statutes on the books make reference to marriage as being only between a man and woman. Counties also depend on software that provides for a bride and groom. Jason Owens, a member of the same law firm as Mike Rainwater, did most of the talking to the assembled officials. He was hired to represent four counties (not Carroll) in the lawsuit. He also represents 46 counties in the risk management pool that covers claims against counties. (Small world department: Rainwater, Holt and Sexton advertises itself as lawyers to the Razorback nation. A former Razorback volleyball player, wearing a Hog sweatshirt, was first in line for a marriage license Saturday in Eureka Springs, now shut down on the firm’s advice.)

Rainwater and Owens asked this afternoon to enter the Supreme Court stay proceeding on behalf of White, Lonoke, Washington and Conway counties. Owens had said Saturday he’d asked for clarification of the Piazza ruling because of the other statutes.

The statutes are full of references to marriage as being between a man and a woman. It’s dead certain that none of them would pass constitutional muster under Piazza’s ruling even if they weren’t enumerated specifically in his ruling. They are what’s known in the trade as a “technicality.” Also, no lawyer has yet cited any liability on the part of a clerk who issued a license later voided. Who would sue? Nonetheless, the overwhelming number of counties decided to wait for hoped guidance from the Supreme Court.

In Pulaski County, Clerk Larry Crane had his software fixed by Saturday to accommodate filers and as a defendant felt bound to following the rule of a judge who sits in his courthouse. This filing is for a stay of the ruling.

A number of attorneys in the conference call meeting I monitored said there was little liability from refusing to issue licenses, except a contempt order, but that could take days to perfect. In the meanwhile, all hoped a stay could be obtained from the state Supreme Court. Attorneys also suggested moving slowly on getting systems changed to accommodate people who wanted license. Although all urged compliance with court rulings, the underlying theme was clear (an absence of a clear duty to act) and produced the outcome I predicted in a headline about the meeting Friday — few counties are following Piazza’s ruling.

The confusion of different application is part of the argument McDaniel makes for a stay until his appeal of Piazza’s ruling is decided.

The Arkansas Department of Health, a defendant in the case, isn’t hiding behind technicalities. It told the AP it would issue birth certificates listing both parents on the certificate and had begun the process with two couples already.

If the Supreme Court does issue a stay, that won’t invalidate licenses issued since the Friday ruling. But should Piazza eventually be overturned, those licenses could be voided.

To be clear: There is some confusion here. Those counties not named in the lawsuit are not parties and have clear ability to continue to enforce the law as they knew it until ordered otherwise. The counties in the case might be able to find some legal purchase for refusing to do as Pulaski and Washington have done, but they won’t find it on the high road.

BTW: A gay hate group, the Family Research Council, parent of the affiliate Arkansas Family Council gay hate group, has blasted Piazza for “arrogance and disregard of the voters of Arkansas.” But, thank goodness, not of the U.S. Constitution. It is to laugh that leader Tony Perkins says that Piazza won’t adopt a “live and let live” approach. That is: Family Research Council bigotry should be the law of the land and discriminated minorities must live with it.  he really said this:

Rather than live-and-let-live, redefining marriage creates serious inequality as people are forced to suppress or violate the basic teachings of their faith.

What, because of Chris Piazza can I expect Tony Perkins and Jery Cox to shuck their wives and marry a man now? And they can continue to teach hate wherever they wish, just not impose it on others.

From my own experience, I can testify some clerks’ offices are touchy on the subject, reluctant to answer questions about availability of marriages. And scattered reports come of outright hostility. For example:

PS: And then there’s the Huckster. He’s pissed. Send him money. Any news event is an excuse for him to beg money. He also begged money on an e-mail endorsing Dennis Milligan for Saline County clerk. Milligan, currently the Saline circuit clerk, is running for state treasurer. No matter. Send Huck money.