Same sex marriages, dozens of them, began at the Pulaski County Courthouse in Little Rock today and also at the Washington County courthouse in Fayetteville, but most other Arkansas counties ignored the ruling striking down the marriage ban, including four named defendants that adopted a county offcials’ strategy developed Saturday to resist until the Supreme Court was heard from. The holdouts include Carroll County, which had issued 15 licenses Saturday in Eureka Springs when a crowd came seeking them. It issued 12 or 13 this morning, by other news accounts, then Clerk Jamie Correia told her staff to stop issuing them.

Attorney General Dustin McDaniel filed for stays before both Judge Chris Piazza, who overturned the marriage ban Friday, and the Arkansas Supreme Court. A Supreme Court stay before a final order from Piazza would be unusual (plaintiffs want him to issue an injunction to enforce his ruling), but the Arkansas Supreme Court is sensitive to political winds and might depart from practice here. No indication yet when it might respond to the McDaniel filing, which plaintiffs will contest.

Susan Barr and Shelly Butler were the first to obtain marriage licenses and be married this morning at the Pulaski County Courthouse. Joey Cole performed the ceremony. Circuit Judge Wendell Griffen performed the second marriage, of Devin Rudeseal and Thomas Baldwin.  A single protester, a black Little Rock preacher, turned out.

Though the state is trying to get Judge Piazza’s order stayed, action isn’t likely until later in the day, if then. Meanwhile, marriage equality reigns in Arkansas. 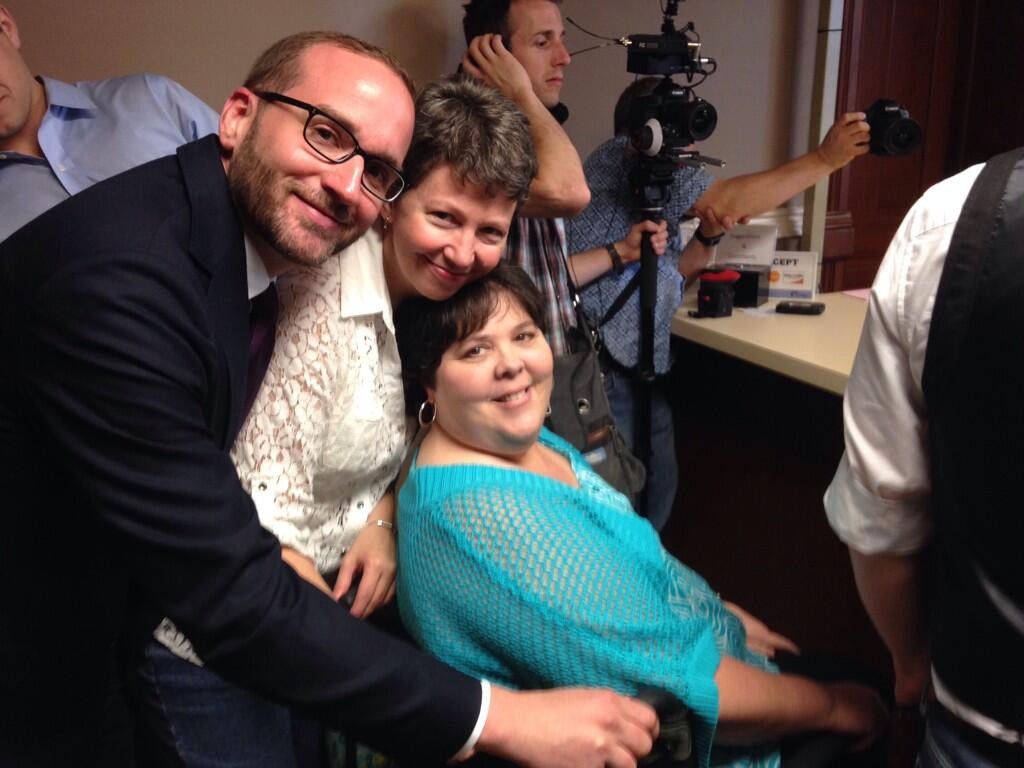 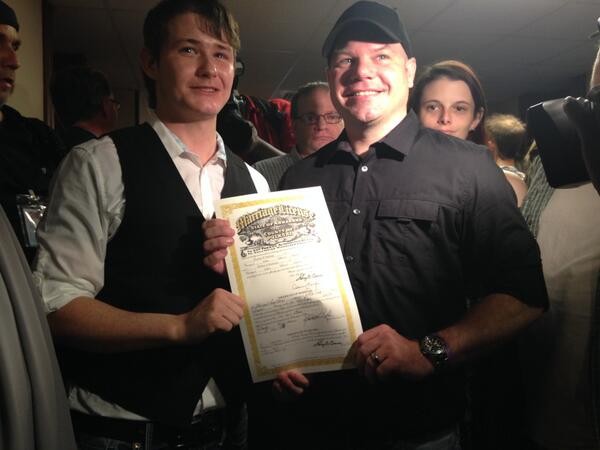 One protester, Charles E. Williams of Covenant of Zion Cathedral in Little Rock, stood outside with a hand-lettered sign proclaiming this a sad day for Arkansas. Dozens, by their presence and smiles, witnessed a different opinion.

Most counties in Arkansas will not be issuing licenses, relying on legal guidance that — if the counties were not defendants in the case (only six were) — and absent a direct order to cease discriminatory practices, the state ban remains in place in those counties.

Washington County, one of the defendants, also began issuing licenses to same-sex couples. Justice of the Peace Eva Madison posted a Facebook photo after she signed the first such license in Washington County. By 9:30, a couple of dozen licenses had been issued. 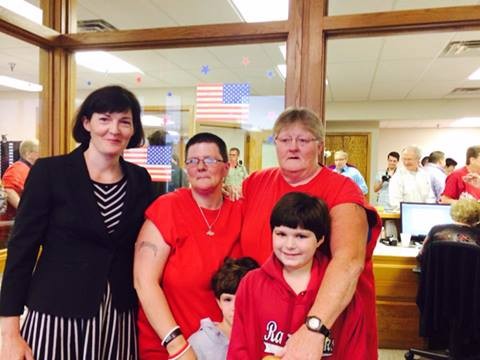 Several counties had hoped to raise an objection about lack of proper software as a delaying tactic in hopes a court will stay the order. But even the county attorney in Republican Benton County, while claiming exemption for that county because it isn’t a defendant, said claiming lack of software was a poor excuse. The counties could simply return to using paper and typewriters as they did in the pre-computer days. Perhaps a request for a contempt of court order would get Lonoke’s attention.

Ultimately, most counties, including four defedants, fell back on a strategy doped out by the Association of Arkansas Counties at a meeting Saturday. They are not issuing licenses. They cited the need for judicial clarity. In Lonoke, they tell callrs they’d hate to issue a license that might be revoked. This is balderdash, of course. Jack Wagoner, an attorney for the plaintiffs, said he’s busy trying to respond to state legal motions, but later in the week might consider seeking contempt rulings against defendant counties that aren’t following Piazza’s ruling.

Piazza has not issued a specific order requiring defendants to follow his ruling. And the county association also raised the supposed problem that some other statutes referring to marriage as between a man and woman remain on the books. It’s a trifling argument in the face of the constitutional ground on which he struck down a 2004 amendment and a 1997 statutory ban.

The Baxter Bulletin reported, however, that Marion County Clerk Dee Carleton said her office in Yellville will issue marriage licenses to gay partners.

Chad Griffin, the Arkansas native who leads the Human Rights Campaign and whose PR strategies have propelled the campaign for equality around the country, spoke at a news conference at the courthouse this morning. He’s seeking federal recognition of those married in the state..

“Wedding bells are ringing in the great state of Arkansas. … In just a few moments, the couples lining up at City Hall right now will at long last have the opportunity to marry the person they love in the state they love. This ruling is a long, long time coming and Arkansas advocates have been fighting this fight for years. Today, thanks to 46 brave plaintiffs and two brilliant, brave lawyers—because of them and their colleagues and their fellow plaintiffs, LGBT people across this state, and across the South — especially young people — today have a hope for a greater future. Even as an appeal proceeds, the commited and loving Arkansas couples deserve full and complete equal treatment under the law. That’s why the Human Rights Campaign has requested that the United States Attorney General and the Department of Justice immediately extend full federal recognition to all same-sex marriages performed here in Arkansas.”

The docket now reflects both Attorney General Dustin McDaniel’s notice of appeal in the case and a motion for the judge to stay his order pending the appeal. It notes courts in other states that have made similar rulings have stayed judgments.

The argument for a stay is the confusion of differing interpretations among counties (encouraged by advice from marriage opponent lawyers among  the lawyers brought together in Saturday’s county officials meeting.)  Opponents of the ruling also claimed there’s a problem because, though Piazza made it clear he wants to end marriage discrimination, his ruling didn’t mention a number of other routine marriage statutes that define marriage as being between a man and woman, such as the statute on procedures in covenant marriages.

Piazza’s office said he would not rule until he had a response from plaintiffs’ attorneys and that might not arrive until the afternoon. He could rule this afternoon. Or not. McDaniel also lodged a partial record with the Supreme Court in hopes of winning a stay there. Wagoner, the plaintiffs’ attorney, was preparing to respond in both courts but said he didn’t think it was proper for the state to seek an “end run” around the trial court’s ruling and, under normal procedures, the Supreme Court wouldn’t enter a stay until there was a final order in the case.

Wagoner’s co-counsel, Cheryl Maples, said plaintiffs believed there were open questions for Piazza to consider — including their request for an injunction — and she believed the Supreme Court should also give plaintiffs a chance to respond before ruling. She said it could take until Tuesday to complete her response.

However, “if the Supreme Court wants a response today, they can demand one, and I will comply, I’ll find a way to comply. I’m wanting the opportunity to think this thing through and do it properly because it is so important to so many people.”

Will the Supreme Court act today and put a stop to these marriages?

“There is a possibility they could. I’m wanting these couples to get married and get their licenses filed as quickly as possible because I don’t know what’s going to happen. Things are moving a little faster than I would wish.”

“They have the right to ask [for stay from Supreme Court] once they’ve filed an appeal. The appeal cannot actually be filed until there’s a final order. And I believe that we’re going to take the position that there isn’t one…I know that there’s issues out there that I want addressed, which should be part of what is appealed, and I need an opportunity to put this together.”

Should a stay be issued, the certificates issued remain valid until a court rules otherwise, Clerk Larry Crane said.

The lawyers who won the case also spoke at a news conference this morning:

Cheryl Maples: “My personal feelings were that I wanted to do what was right for my daughter and for an uncle of mine that was very dear to me that died of AIDS without any family other than me there with him. …For the rest of my life I will never forget these last few days. …We’re going to continue this fight, we’re going to win this fight.”

Jack Wagoner: “I’m so honored to do my daddy proud. My father opened the first interracial medical practice in the state of Arkansas in 1969. In 1969 that was a bold move for a white doctor to make straight out of medical school with a handful of kids to raise. But my father had the courage to do what he knew was right. …I’m honored to be a part of this latest wave of civil rights movements, and honored to be a part of bringing equality and justice to all people on this earth, as I think our Creator intended.”

Maples added: “I am very proud and appreciative of the beautiful decision that Judge Chris Piazza wrote. It is magnificent. It makes you cry while you’re reading it.” 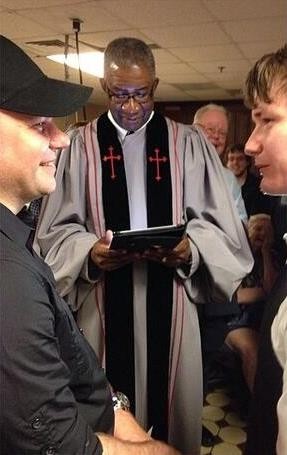 Judge Wendell Griffen, who is also a Baptist preacher, commented on his role as officiant of several unions.

“I was asked to be an officiant by people who I’ve known and been involved with issues of equality for years. I was glad to say yes. I married a couple named Thomas and Williams. It was a blessing—just like every marriage ceremony I’ve done. Excitement, anxiety, I don’t care how many times they prepare for it, they trip over the lines. Wonderful.

It was the same, but it was different in a much bigger kind of way. This is historic. These are people who have loved each other and been committed to each other for years. I’ve got a ceremony I’m doing for a couple that’s been together longer than I’ve been married to my wife—43 years. But they have never been able to live openly as married people. This is historic because now they are open. They are married. They’re not just together, they’re married.

Equality is always an arc and the arc of justice always bends toward equality.”

The cranks are emerging. Pulaski Republican JP Shane Stacks has summoned Clerk Crane and County Attorney Karla Burnett to appear before the Quorum Court Tuesday to explain why Pulaski is issuing licenses dispute a press release that said Faulkner County would not. The Quorum Court has no constitutional authority over the clerk, who was a defendant in the case in which Piazza ruled. Faulkner County was not. Pulaski County is obeying the law. Stacks just want’s to play to his party’s peanut gallery. As even county officials heard Saturday, there’s no imaginable legal liability downside from issuing a license that might be voided if Piazza is reversed.