The line is open. What better way to finish than news from Huffington Post that Republican Rep. Tom Cotton, the extremist Club for Growth cutout for U.S. Senate against Mark Pryor, has scrubbed his record of praise of his votes against money to fund federal disaster relief — some of it now pouring into tornado-ravaged Arkansas.

A Republican Senate candidate from Arkansas voted against billions of dollars in assistance for Hurricane Sandy victims in January 2013 and then proceeded, both in interviews and on his campaign website, to stubbornly defend his votes opposing the federal disaster relief.

But it appears Rep. Tom Cotton’s (R-Ark.) campaign has taken down two blog posts in support of those votes from his website.

According to an Internet archive, the blog items, which were posted months before Cotton announced his bid to unseat Sen. Mark Pryor (D-Ark.), were online until late January of this year.

The first post from January 2013 was a letter to the editor calling Cotton’s approach to the federal aid for Sandy victims “sensible.” Cotton had explained that he believed that “a lot of that money was not going to natural disaster relief” and he didn’t “think Arkansas needs to bail out the Northeast.”

The second, from the same month, was a piece that spoke positively of how Cotton decided which way to vote. The representative told the author that he would have voted for the relief if it had been offset by spending cuts.

Cotton was the sole member of Arkansas’ congressional delegation to vote against $9.7 billion in funds for the Federal Emergency Management Agency to be able to pay out flood insurance claims.

David Ray, Cotton’s mouthpiece, harrumphs that this is just site “maintenance.” Viability in the political system maintenance is more like it.

No wonder three credible polls show Pryor with a big lead. No wonder Cotton’s team cobbled up an “internal” poll by a Republican outfit. The best it could come up with was a two-point lead for Odd Tom.

* MARRIAGE UPDATE: Republicans on the Quorum Court in Pulaski County are calling Larry Crane, the clerk, and the county attorney, on the carpet over the spectacle of hundreds of people  being given full citizenship this week. Shane Stacks is the instigator. It’s political demagoguery, no more or less. 1) Separation of powers — the Quorum Court was not a defendant in the lawsuit; Larry Crane was. He has constitutional duties. They are not set by the Quorum Court. 2) There is NO, repeat NO, liability to the county from issuing marriage licenses to people who want them. Any resulting confusion is on them — and an unfair legal system. Period. Back to your corner Shane Stacks.

ALSO: From Channel 4, the same-sex marriage update with today’s count, bringing the three-day total to around 400: 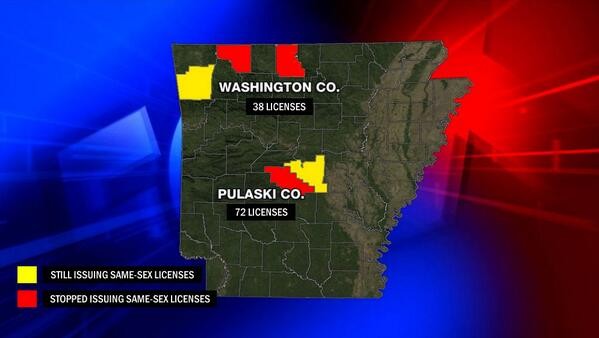