The proposed Keystone XL pipeline brought together campaign rivals Sen. Mark Pryor and U.S. Rep. Tom Cotton Monday morning at a press conference hosted at Welspun Tubular LLC, the east Little Rock pipe plant, along with U.S. Rep. Tim Griffin and state legislators and business leaders. Because of environmental concerns, the White House is reluctant to approve the Keystone project, which would deliver about 800,000 barrels of carbon-heavy Canadian tar sands oil each day to Gulf Coast refineries and cross hundreds of miles of sensitive lands. Pryor, Cotton and Griffin all urge President Obama to drop objections to the pipeline, which they say are standing in the way of job creation in Arkansas.

Also in attendance: Corey Goulet, the vice president of pipeline operator TransCanada and therefore the man whose job it is to build Keystone. After the conference, Goulet spoke with the Times about the proposed pipeline and the controversy surrounding it.

The steel pipe that may or may not become the final leg of Keystone has already been manufactured by Welspun and bought by TransCanada. Three-hundred and fifty miles of pipe now waits patiently in vast, rust-tinged stacks in a gravel lot outside the Welspun facility. Another 350 miles made by Welspun has been put in the ground already to build a leg of the Keystone line that doesn’t require presidential approval.

If the material that will become Keystone has already been built and bought, how does approving the pipeline have any affect on Arkansas jobs? Goulet said that TransCanada is now using some of the pipe intended for Keystone to build new projects instead — whereas it would normally be ordering freshly manufactured pipe from Welspun. 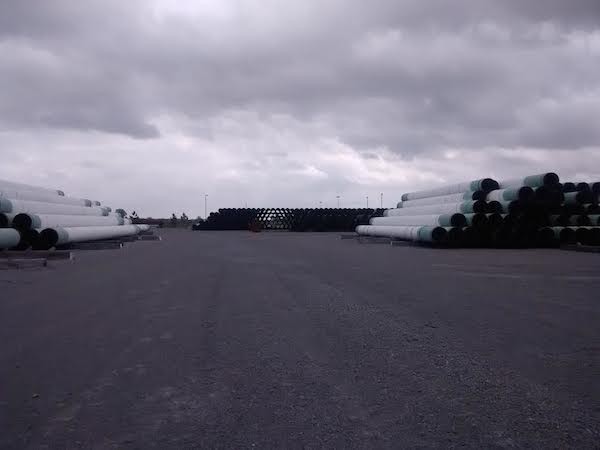 “We’ve used 129 miles for the Heartland Pipeline in Alberta,” he said. “That would represent a half year to a year of 300 workers [at Welspun], working to build that pipe alone. They have inventory of steel on site waiting to do that … intended for these other projects … We’re working on natural gas and oil, and we’ll use this pipe up if Keystone XL doesn’t go ahead. But we’re careful not to use too much, because we still strongly believe the Keystone project will be approved.”

Dave Delie, president of Welspun Tubular, agreed. “If [the Keystone] pipeline doesn’t go, this will be used on other projects and we’ll be competing not only with our competitors but with the pipe that we’ve produced.” He also said that the project of loading and shipping the 350 miles of pipe currently sitting fallow would itself generate “at least 50 jobs for 6 to 9 months.”

That may be too black-and-white. For one thing, if Keystone is eventually approved, TransCanada would need new pipe to replace the portion that it repurposed for use in other line. For another, wouldn’t the task of loading pipe destined for one TransCanada project create just as much work as the task of loading pipe destined for the next? But the real issue with Keystone has always been a question of costs versus benefits. Jobs are created along with a pipeline, but so is a serious environmental and public health risk, as residents of Mayflower know.

Goulet — and Pryor, and the other elected officials on hand — made familiar arguments about risk. Most spills happen on older lines such as the Pegasus, the ruptured ExxonMobil line that spilled Canadian tar sands crude in Mayflower. It’s safer to move oil by pipeline than by rail or ship. And, if we don’t use the oil, somebody else will.

“This project is really a no-brainer,” said Pryor in his remarks. “That oil is going to come out of the ground … we know what happened in Mayflower, but we also know that materials are better now, monitoring is better, engineering is better, et cetera…. it’s just time to build this pipeline.”

“From the very beginning, I’ve been in a different place than where the president is on this,” said Pryor. “We hope we’re going to have votes on that this week.” Pryor was referring to an energy bill that as of today seemed stalled in the Senate. Republicans and some Democrats, including Pryor, had planned to use an amendment on that bill to force Obama into taking action on Keystone.

(As an aside: along with the congressional delegation, several Republican state legislators also turned out for the event. They included Sen. Jason Rapert and Rep. David Meeks, both of whom have called for the impeachment of Judge Chris Piazza following his invalidation of Arkansas’ same-sex marriage ban. While on our facility tour, KUAR reporter Jacob Kauffman tried to engage Meeks about the issue. He declined to comment.Tom Cotton, on the other hand, told Kauffman he disagreed with the idea of impeaching Piazza.“I don’t think judges in general should face impeachment because of a decision they made,” Cotton said, but added, “I do think the judge should have stayed his ruling.”)

The bigger picture, as always, is climate change. Advocates of Keystone point to a state department report from earlier this year that says the proposed project’s overall impact on carbon emissions would not be significant. Opponents of the pipeline — in addition to disputing some of that report’s conclusions — say that any major expansion of crude oil infrastructure is unacceptable.

At one time, the petroleum industry aggressively rejected the premises of climate science, but these days industry executives such as Goulet are fighting a more subtle rhetorical battle. It’s necessary to move away oil, he acknowledges. Eventually, that is.

“We’ve invested $5 billion into wind projects, nuclear, solar, hydro facilities,” he said. “We understand the economics … we understand that we have to go to a less carbon intensive future than where we are today. But the fact is the U.S. uses 15 million barrels a day of crude oil, and even with all those advancements in other technologies and policies to create those new jobs, we won’t stop using crude oil tomorrow, or next decade, or even two or three decades from now.”