* The court affirmed lower court decisions that temporary suspensions of law licenses for failure to pay bar dues on time did not disqualify Judges Tim Fox and H.G. Foster and candidate Angela Byrd from being candidates.

The Supreme Court decided that a suspension was not the same thing as saying a lawyer had lost a license. Thus, all the candidates in question remained licensed attorneys for the six years of time immediately preceding an election required under the State Constitution for a circuit judge candidate.

Justice Donald Corbin dissented and in doing so took note of Attorney General Dustin McDaniel’s recent criticism of the court for being “results oriented” — or ignoring law and precedent to reach the outcome it wanted.

Corbin said the majority had “tortured” the meaning of the word suspend and that the plain language of the Constitution requiring a license was clear. A license allows someone to practice law. When someone is suspended, they may not practice law. Taken away for even a short time, he said, a license is “not worth the paper it is printed on.” 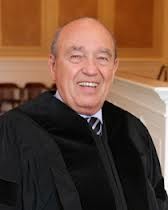 Recently, this court was publicly accused of being results oriented. Never has that been more evident than with today’s decisions.

The arguments raised to us, in both length and intricacy, are a fine demonstration of what lawyers are best at doing — lawyering. But hair-splitting legal arguments and analysis are not necessary to resolve the issues here presented.

…Because the majority has tortured the meaning of “suspend” in such an absurd way, a lawyer who is suspended, either administratively or for misconduct, may not qualify as a judicial candidate. It is even more ludicrous to conclude that an attorney may qualify, as a judicial candidate, even though he or she is precluded from engaging in the practice of law, yet that is the precise result of the majority’s holding.

Justice Jo Hart, who wrote the majority opinion in the case challenging Fox, the basis for all the other opinions, she chastised Corbin in a footnote for his remarks.

The dissent remarks, “Recently, this court was publicly accused of being results oriented. Never has that been more evident than with today’s decision.” Although every opinion that this court promulgates achieves a “result,” it is disappointing that a justice of this court would resort to this rhetoric.

An undercurrent here, of course, is that a strict reading of the Constitution suggested by Corbin would put in question the qualifications of sitting members of the court and an unopposed candidate this year, Rhonda Wood.

In the Foster case, in an opinion written by Justice Cliff Hoofman, the court agreed that an automatic suspension of a license without notice was a violation of procedural due process. Justice Jo Hart said that since the court had not removed Foster, it didn’t need to reach that issue. Corbin dissented. He said the failure to pay fees on a timely basis was a disqualifying factor. Those positions were repeated in the Byrd case.

* It dodged the eligibility issue in dismissing an appeal from Valerie Bailey, disqualified from the ballot in Pulaski County on account of a long suspension of her law license in the years preceding her filing. It dismissed her appeal on technical grounds. It said she had not moved expeditiously enough to challenge the lower court’s decision. She thinks they dropped the ball, saying, “At the very least the Court should have reversed Judge Cole’s declaratory judgment against me, and ruled that I am eligible for the exact same reasons that apply to Fox’s eligibility.”


The Bailey decision was unanimous, but Special Justice Woody Bassett wrote a concurring opinion in which he said he believed Bailey met the qualifications for running as set out in the other decisions, though her law license was in suspension from 2004 to 2011. He said, however, that her appeal was moot for the reasons described in the majority opinion.

The Supreme Court also affirmed Judge Tim Fox’s decision finding unconstitutional a State Board of Election Commission rule intended to fix an oversight in the new Voter ID law that left absentee voters without the same ability in-person voters have to cure failure to initially provide valid ID. But the court reversed his decision that the whole Voter ID law was unconstitutional. It was not a substantive ruling. The Supreme Court said the validity of the whole law had not been developed in this lawsuit. A separate lawsuit is challenging the Voter ID law. Fox also issued a summary judgment striking down the law in that case but stayed that ruling pending appeal. The Voter ID law has been effect in early voting in the primary and will remain in effect. But the full challenge of the Voter ID lawsuit, in a case mounted by the ACLU and the Arkansas Public Law Center, will continue. It will be a long road. Fox issued a summary judgment in the overall challenge based on a reading of the law. The Supreme Court seems likely, based on today’s decision, to eventually order him to fully develop testimony in the case.

Justices Baker and Hart dissented from the majority saying the majority was wrong for saying the circuit court reached the right result for the wrong reason. They noted that under Fox’s ruling, which invalidated the whole law, absentee voters wouldn’t have to produce ID. Under the majority opinion, they’ll still have to produce an ID but have no means to cure the problem. Thus, she said, the reason was right, but the result was not. They’d have remanded for further proceedings, presumably to address the unequal position in which absentee voters find themselves.

The cases were heard by a court with three special justices — Todd Turner, Woody Bassett and Raymond Abramson. Justices Paul Danielson, Karen Baker and Courtney Goodson recused themselves. All seven members of the Supreme Court had been tardy in fee payment at some time in their legal careers — Baker and Goodson during periods in the required years of legal service necessary to qualify to run for judge.