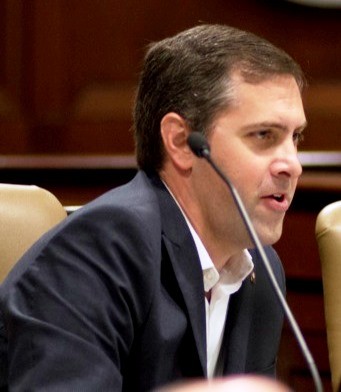 By a roll call vote this morning, the Arkansas Legislative Council failed to suspend the rules to consider Sen. Jason Rapert’s resolution expressing support for Amendment 83, which mandates discrimination against gay couples by prohibiting them from marriage or any measure giving them the legal rights of marriage.

The chair declared the issue dead for the day.

Republicans are howling about usurpation of the “democratic process.” Meaning: rules and votes don’t count when we want our way.

This is a joke. Are we using rules or not?

UPDATE FROM BENJI HARDY: A motion to suspend the rules was necessary for consideration of the resolution because it wasn’t filed with adequate notice before the meeting. That required a two-thirds vote. Rep. Greg Leding asked for a roll call. The two-thirds vote failed on the Senate side, with 8-6 in favor, but short of the two-thirds (10) necessary. The House contingent voted heavily for consideration, 19-5. By the roll calls, the resolution would have passed had it been considered.

Then the debate became whether a two-thirds vote of all voting was needed or two-thirds from both the House and Senate delegations.  Chair John Edwards, after the division was illustrated, declared the rules suspension had failed.

Rapert argued there should have been an overall roll call vote on the resolution. Edwards gaveled the meeting to a close. Edwards is a term-limited Democrat from one of Little Rock’s most liberal districts.

One Republican, House Speaker Davy Carter (a lawyer) voted against considering the resolution today. A number of Democrats sponsored the resolution.

The resolution is without legal meaning, but it has served its purpose of sending a message of legislative displeasure to the Arkansas Supreme Court, which has an appeal of Judge Chris Piazza’s marriage equality ruling under consideration.

The audience included proponents of same-sex marriage, who applauded at Edwards’ ruling.

Afterward, Rapert said he was disappointed in Edwards. Republicans on Twitter are livid and blaming Democrats.

Rapert said only three percent of the U.S. are people living the  “homosexual lifestyle” and they are trying to force it on those who don’t. He said he had 56 co-sponsors and would bring it up again. It will, of course, pass when a rules suspension isn’t necessary.

Rapert apparently believes equal protection should be denied if a group is small enough. Nobody of course is attempting to force Rapert to date men or marry one. They are simply trying to prevent Rapert from dictating to them how they must live.