American Legion Boys State will have its day at the state Capitol today and it will be something of a Little Rock Central High club meeting at the highest level of the government elected by the rising high school seniors.

Speaking of Bro. Rapert and myself: One final footnote on the great debates this year at Boys State. Boys State delegates were polled yesterday at the closing UCA session on their favorite speakers of the session. Through the miracle of smart phones, I got multiple copies of the voting in action last night. The “liberal bully” (i.e., me, if you haven’t been following) forwarded the one below to Bro. Rapert. No response or certificate yet. He may still be checking Voter IDs. 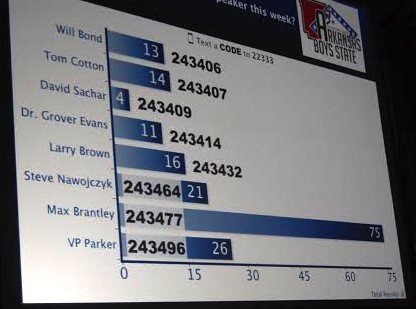