As expected, the Arkansas Legislative Council easily approved Sen. Jason Rapert’s resolution endorsing Arkansas’s constitutional discrimination against gay couples in marriage. It includes encouragement of legislative action to prevent judges from negating the “will of the people.”

Plenty has been said on this already. Rapert doesn’t recognize judges’ ability to interpret the Constitution in ways he disagrees with. He insists equal rights are OK for black people now, but not gay people. He hasn’t yet explained how the will of the people and religion wasn’t defied — as the majority then said it was — in the landmark civil rights decisions of the 1950s and 1960s.

About eight people were on hand to object to the resolution, including a Little Rock teacher who lost her job at Mount St. Mary Academy after marrying her partner. Rep. John Walker, a giant in the civil rights struggle for African-Americans, rose in opposition to Rapert’s resolution. Sen. David Johnson of Little Rock also spoke against it. Johnson noted that Judge Chris Piazza, blistered in the Rapert opinion, had issued a decision in keeping with that by numbers of judges across the country. All have found equal protection and due process violations in state discrimination against gay couples.

Walker said people are born with equal rights and  the courts should respect that. Rapert said this is against the will of the people. Fifty-six legislators — of 135 — signed his resolution. Amendment 83 was approved by 75 percent of Arkansas voters in 2004, but recent polling indicates Arkansas is moving with the rest of the country to a more generous view of civil unions, also prohibited by the amendment, and marriage.

Rapert’s speech was mind-boggling as always. He asserted most gay couples didn’t want to marry, they just wanted “affirmation.” He said there was no evidence anyone was born gay. He said same-sex marriage would lead to laws that limited free speech by preachers. Nonsense. What isn’t nonsense was Walker’s statement that this is a blow to judicial independence, a terrible thing. Said Johnson: “This resolution is false and we have no business adopting it.” As if facts matter to the faithful.

The measure passed on a voice vote. No roll call. Rapert was also allowed to complain about a procedural vote that blocked consideration of the resolution earlier. 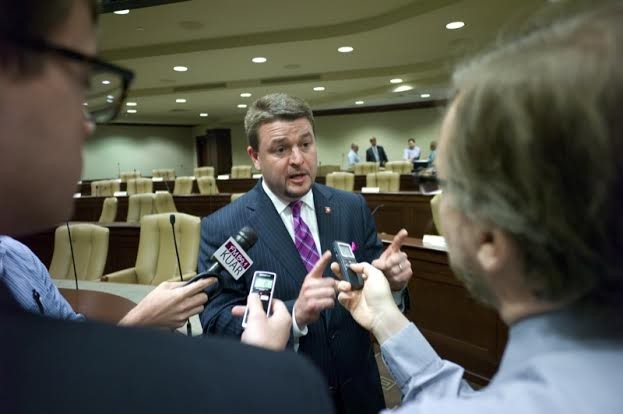