The ACLU has long looked askance at the increased acquisition of military-style weapons and equipment by local ,police agencies. Now it has a report, “War Comes Home: The Excessive Militarization of American Policing,” that says that equipment has been used disproportionately against minorities in the “war on drugs.”

Combing documents, it looked at 800 SWAT raids in 20 states, including Arkansas.

“We found that police overwhelmingly use SWAT raids not for extreme emergencies like hostage situations but to carry out such basic police work as serving warrants or searching for a small amount of drugs,” said Kara Dansky, Senior Counsel with the ACLU’s Center for Justice. “Carried out by ten or more officers armed with assault rifles, flashbang grenades, and battering rams, these paramilitary raids disproportionately impacted people of color, sending the clear message that the families being raided are the enemy. This unnecessary violence causes property damage, injury, and death.”

Go here for the full report. It includes a map of places “hyper-aggressive policing” has occurred, in tandem with racial makeup of the communities that got disparate attention.

The Arkansas angle? Start with the breakdown, racially, of people invaded by LR SWAT teams. It’s a racial gap that persists, the ACLU says, throughout every facet of the failed “war on drugs.”

The ACLU highlights individual cases around the country where SWAT teams were used to serve drug warrants. One case, in September 2012, was in Little Rock.

A fully armed SWAT team forced entry into Angelo Clark’s home in Little Rock, Arkansas at dawn one morning in early 2012. The SWAT team was conducting a drug search. Clark pointed a gun at the armed men breaking into his house and was shot and killed by the officers. At leat 46 civilians [nationwide] suffered injuries and seven were killed in the course of deployments the ACLU studied, often as a result of use of force by a SWAT team member.

The incident, reported here at the time, was found to be justified. No cocaine, the putative sale of which prompted the raid, was found in the house. Police say they go where crimes are suspected.

And then there was Paragould: 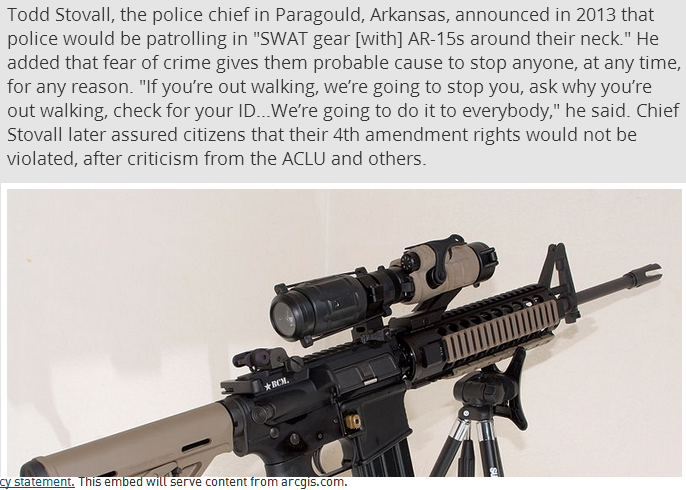 The report calls for the federal government to rein in incentives for police to militarize and for local governments to do a better job of tracking the use of military gear. The ACLU also wants state legislatures to develop criteria for SWAT raids that limit their deployment to emergencies such as active shooter situations.