David Couch, attorney for Let Arkansas Decide, says the petition drive for a constitutional amendment to allow alcohol sales in every Arkansas county had — in 30 days — met the threshold for signatures to qualify for the ballot.

He turned in 84,969 signatures, with the minimum percentage in 25 counties. The secretary of state will determine if 78,133 of those are registered voters. The drive also must meet the threshold without “facial” disqualifications for obvious flaws. If, after validation, the number is short, the group will have 30 days to seek more signatures.

Give Arkansas a Raise Now also will turn in petitions today for an initiated act to raise the $6.25 Arkansas minimum wage to $8.50 an hour by 2017. It needs 62,507 signatures. UPDATE: Its petitions were submitted in the morning as well. It submitted 77,288 signatures.

Two marijuana legalization petitions also had been circulating. One would have allowed medical marijuana; the other was a straight decriminalization effort. The medical marijuana effort folded weeks ago, lacking paid backers. The other measure got a late start and also had no paid canvassers, as the alcohol and minimum wage efforts have used. It got a late start because of delays by the attorney general’s office in approving the form of the proposal. With only a month to go, it fell short. Organizer Robert Reed said on Facebook late last night that the campaign had fallen short.

Groups with backers similar to Let Arkansas Decide (retail grocers, for example) also have been gathering petitions in three counties — Craighead, Faulkner and Saline — for local option elections to allow alcohol sales. The highest profile has been in Faulkner County, where Walmart and Kum & Go have financed the petition drive. Alcohol sellers in Conway County, now a regional oasis for lucrative Faulkner sales, have been opposing the petition drive.

Couch said the plan for those local initiatives aren’t yet fixed now that a statewide vote has a good chance to qualify for the ballot. Local option petition deadlines fall later in the cycle, in August.

If the measure makes the ballot and passes, retailers could begin the process of applying in each jurisdiction to sell beer and natives wines at grocery stores and apply under existing population rules for available retail liquor store permits. The statewide campaign could be fierce. Major retail chains will weigh in on the side of sales. So-called county line liquor stores that do big business from lying on the periphery of dry areas will fight against it. They’ll align with religious forces that oppose all alcohol initiatives. Demographics favor alcohol sales on a statewide basis, with the majority of the Arkansas population already living in places where sales are legal. About half the state is dry geographically, though virtually all counties have “private club” alcohol options.

UPDATE: David Couch provided a bit more background on a wrinkle on local option petitions. When the legislature changed canvassing laws in 2012 it omitted a portion of the law pertaining to local petitions that included an Aug. 5 deadline for submitting petitions. Couch thinks the omission was inadvertent. He thinks that, without a statutory reference, the local option deadline most likely reverts to Aug. 7, because of constitutional language, though others will likely argue that the July 7 deadline for state initiatives applies. Whatever is decided would become challenged in court. Local option people thus might decide to file today; they might pull back and let the state initiative alone go forward, or they might file later, presuming a deadline in August.

Given the pitched battle underway in Faulkner County, only a court ruling will finally decide the issue. The battle includes petitions and fake petitions from opponents (they, for example, say a signer wants his or her name removed from a valid petition. It has no practical impact except to confuse the situation and discourage wet/dry petition signers.) I’ve learned, too, that those working for the Conway County liquor stores to fight the wet/dry election include Rep. David Meeks, the former propane truck driver and Religious Righter, who passed out “don’t sign” literature from a Republican county station at the primary election. The Conway County liquor detailers haven’t yet filed detailed expenses to show who’s been paid to work for them in the field. 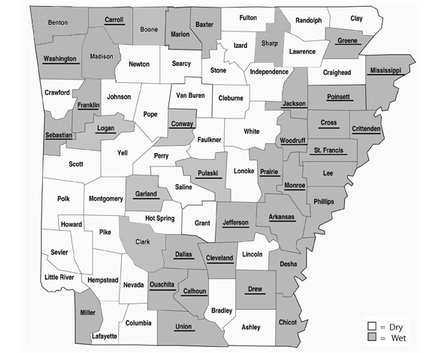