Above is the homestead tax exemption form Republican gubernatorial candidate Asa Hutchinson signed March 2, 2007, to qualify for a $300-a-year tax credit (since increased to $350) on a $147,000 Cambridge Place condo in Little Rock.

The Arkansas Democrat-Gazette discovered, and reported Sunday, that Hutchinson claimed that credit for four years at the same time he was claiming the same credit for a $470,000 home in Benton County. State law allows only one homeowners exemption for the taxpayers’ principal place of residence.

Hutchinson himself reported his illegal double exemption and paid a refund in 2012, at a time when he was preparing to enter the race for governor. Pulaski County assessor’s office officials waived the $350-a-year penalty, accepting his illegal exemption as a forgivable error.

Hutchinson first reportedly told  the Democrat-Gazette he’d gotten the tax credit automatically. The newspaper then produced the form shown above and Hutchinson had to agree that, well, yes, he had applied for it and signed the document.

Was it part of a blizzard of paperwork at a real estate closing, as some have suggested? That’s unclear. But what’s clear is that the intent of the document is quite clear. Hutchinson, a successful trial lawyer, presumably has some experiience with reading legal documents for critical details.

It’s also not clear that the document was signed along with other documents normally signed as part of a closing. The records show that the condo was deeded to Hutchinson on Jan. 3, 2007; he signed a mortgage to Arvest on the property Jan. 12, and he signed the property tax exemption March 2.

The form itself, as you can see, is not highly complicated. It’s facially what it appears to be.  Hutchinson not only signed it, he checked in two places that he understood the critical elements of it.

Below is the form now currently being used. Joe Thompson of the assessor’s office notes that some questions have been added.

The last one was specifically added to try and allow the taxpayer an opportunity to “unclaim” the previous homestead as there really is no mechanism for doing that other than simply notifying an assessor’s office that you have claimed it elsewhere.

PS — Hutchinson said he tried to pay back the four years he got an illegal exemption, but the assessor only took three years. It’s true that’s the maximum the state can seek, but there’s nothing to prevent Hutchinson from going ahead and voluntarily repaying his ill-gotten gain. Also: What provision in the law makes the $350-a-year penalty optional? I’ve asked the assessor.

PPS — Thompson of the assessor’s office explains that when a property changes hands the assessor’s office sends the form to the new owner so that they may fill it out if qualified for the exemption. This makes it more unlikely still that the exemption was part of a stack of papers at a real estate closing. Hutchinson has defended himself with a subsequent letter to a title company that he didn’t intend to claim the credit for 2006 because he didn’t live there then. But that leaves open his claim of the credit in tax years 2008, 09, 10 and 11. (In Arkansas, taxes are collected on property owned the previous calendar year.) 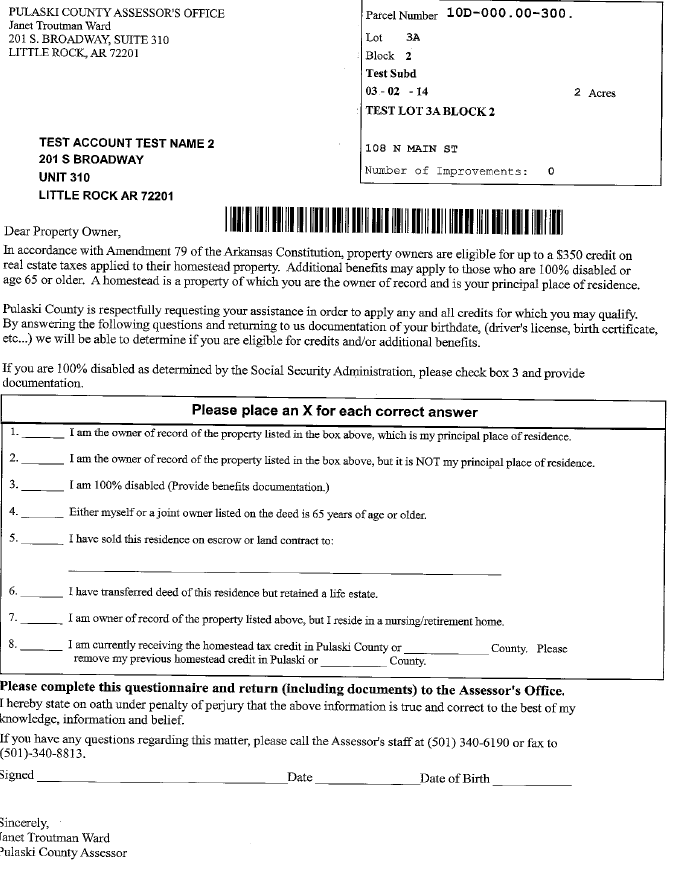