From the mailbag comes a link to this announcement by Mike Rowe, comedian and famous as long-time host of the cable series “Dirty Jobs,” that he’s going to move to “Lafayette, Arkansas” and run for county judge. It’s a little late for a legit candidacy, but still …

Now it’s true, I hold no law degree and no political experience. But from what I’ve seen from recent court rulings, a basic understanding of the Constitution has little to do with education or a prior political record. And though I have no current ties to the great state of Arkansas, I once collected dung beetles at the University, and got along very well with the locals. More importantly, I served as The Grand Marshal of The St. Patrick’s Day Parade in Hot Springs back in 2008, which I’m told went very well.

He’s seeking a campaign manager. And you can keep up on his Facebook page, where he’s received an outpouring of support already. 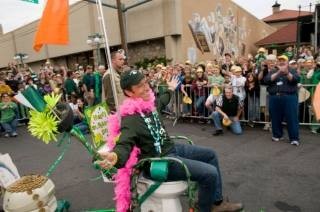 Joking aside — and coincidentally — the race for Lafayette County judge has already been controversial. One candidate in the race, Deputy Sheriff Barry Reeder, was slapped in the face by a woman who alleged he’d molested her as a child in Louisiana. The women and others were protesting outside his office. He said the charge was untrue. He was tried and acquitted in 1997 in Claiborne Parish, La., before moving to Arkansas. Reeder, a Democrat, faces two independent opponents.