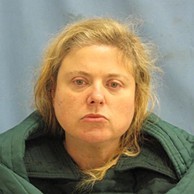 Lacy Rae Moore, 43, has pleaded guilty to two counts of arson, a plea that included starting a fire that destroyed the north building of Forest Place Apartments on University Avenue.

The plea was announced by U.S. Attorney Chris Thyer. Moore was indicted in February on seven arson counts for fires at the apartments between February and June of 2013. An eighth count charged her with setting off an unregistered incendiary device at a private residence. She pleaded to the two largest fires, including a fire May 16, which destroyed the north building, forced removal of 300 residents and permanently displaced 79. Firemen were injured in that fire. She also pleaded to a June 28 fire in the south building that forced out 100 residents.

The Justice Department said that, as part of a plea deal, the remaining counts were dismissed, although Moore said in the hearing today that she set all the fires and she accepts responsibility for restitution for all seven Forest Place fires. That figure has been set at $12.5 million. First she faces penalties ranging from a minimum of 5 and 7 years on the charges to 20 and 40 years.