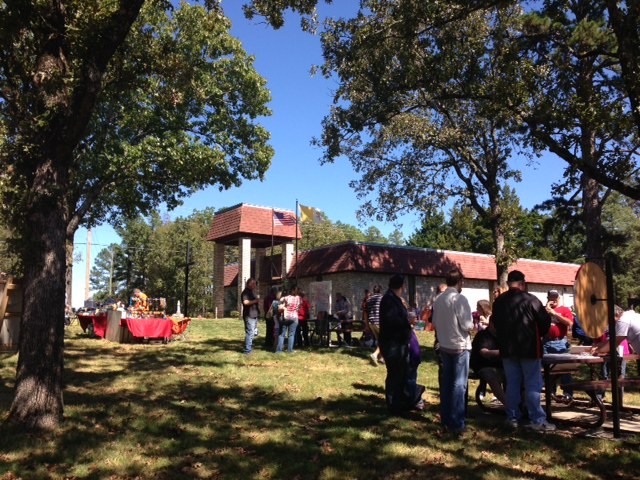 I know Little Italy mostly as a remote community in the scenic northwestern reaches of Pulaski County famous for an annual spaghetti dinner at the local Catholic Church founded by settlers of Italian descent. Now, near the 100th anniversary of its settlement, residents are on a drive to incorporate the community as a legal municipality.

Good. Somebody else to charge to run the Pulaski County Jail. (Just joking).

A website details the plan and shows a map of the proposed town which they hope to see created by next year. Here’s the Facebook page. About 400 people live in the area proposed for incorporation.

Here’s a news release on the effort.

After nearly 100 years, the community of Little Italy is one step closer to becoming an incorporated town. Founded on December 23, 1915, and originally named Alta Villa by its settlers from northern Italy, Little Italy is located in Pulaski County just 16 miles northwest of Little Rock.

“Little Italy has always been an independent community of friendly people who love where they live and are proud of their history, and a grassroots effort is now underway to seek incorporated status,” said Kristy Eanes, great-granddaughter of the area’s first Italian settlers and incorporation co-chair. Together with co-chair Chris Dorer, a Little Italy resident and local historian, Eanes formed a task force that has spent nearly three years researching the advantages the community will have that it currently lacks without town status.

“The timing to incorporate seems perfect with an eye on next year’s centennial anniversary,” Eanes said. In an effort to understand the intricacies of establishing a municipality, Eanes and Dorer researched similarly-sized towns in Arkansas, sought expertise from individuals with legal and practical knowledge in municipal planning, and developed a business plan.

While historical preservation and eventual urban sprawl from Little Rock are chief concerns of incorporation supporters, other issues are cause for incorporation as well. “Though part of Little Italy is in Pulaski County, most of our utilities are based in neighboring Perry County. Students in our area are zoned to attend East End Perry County Schools.” Dorer said. “Because of this, an incorporated Little Italy would have opportunities to improve some services autonomously while maintaining what is already working with the county.”

Dorer believes that incorporation is the answer to many of the concerns, including road maintenance and emergency response needs. “If we incorporate, we have the ability to attract more utilities to our area, to improve our infrastructure, and to decrease the response times from emergency agencies,” he said.

Incorporation leaders believe increased services are possible using existing funds that currently are shared with Pulaski County. If incorporated, potential sources of income for the town include state turn-back funds based on population, grant money, and franchise fees levied on utilities.


Eanes believes that incorporation will ultimately do more than simply preserve the area’s heritage. “An incorporated Little Italy means a Little Italy that is governed by the people who live here and love our community,” she said. “Our citizens will have a collective voice, recognized by the state of Arkansas, giving us a seat at the table in matters that concern our community. Better services and better government representation will yield a more invested citizenry. In turn, this will increase the quality of life for Little Italy and our neighbors.”

In addition to preserving the area’s heritage and improving services, incorporation leaders see an opportunity to encourage the local economy and recreation for its citizens. “The town would be in a position to promote small family-owned businesses and recreation appropriate to the area that are a fit with the community’s vision.” Eanes said. “We could also add protected bike lanes along the Highway 300 stretch of the Arkansas River Trail.”

Under Arkansas law and given the population of Little Italy, a minimum of 200 qualified voters must sign the petition before submitting it to the county judge. Half of the necessary signatures have been collected, Eanes confirmed. Both she and Dorer are confident that they will collect the required 200 signatures.

“We have received a tremendous amount of positive feedback,” Dorer said. “If that trend continues as we gather additional signatures, we should have more than enough to present our petition to the county judge.” The group aims to have the petition ready for submission by March 1, 2015.

Eanes, a descendant of the Belotti and Vaccari families, two of the original Italian families to the area, is a Little Italy landowner. She feels strongly about the incorporation bid because of her ancestral roots here.

“My great-grandparents came from Italy to America searching for a better life for their families, and they found it here,” Eanes said. “I want to preserve and protect what they found and loved. My land and that community are deeply rooted in me.”

Dorer, a life-long resident of the area, authored a book in 2002 titled Boy the Stories I Could Tell: A Narrative History of the Italians of Little Italy, Arkansas. The book is a compilation of oral stories that tell the area’s history. Though not of Italian descent, he has written several articles highlighting Little Italy’s cultural heritage and seeks to hold urbanization at bay.

“As a child I remember traveling along Highway 10 and recognizing the cultural identity of the Pankey community as separate from that of Little Rock,” Dorer said. “Now, if you asked someone who moved to Little Rock after 1990 where Pankey is, they probably will not know the answer. I don’t want that to happen to Little Italy.”

Incorporation organizers hope that by the first quarter of 2015 their efforts will be fruitful and that Little Italy will be the newest town in the state. “We won’t just be a novelty anymore,” Dorer said. “We will be able to decide our own future and advance our own interests. I think the original settlers of Little Italy would be proud of what we’re doing. They believed in America and this endeavor into the American political process is their struggle for liberty manifested.”