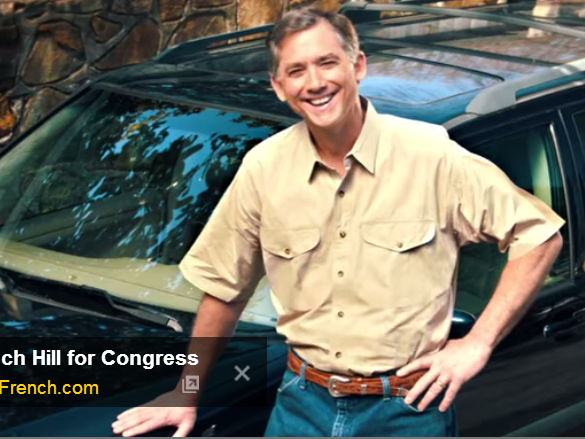 Master French will be as frugal with your money as he is with his own. That’s the message of a good ad.

But the Huffington Post has gone to the records to note that French and wife, Martha, a corporate lawyer and insurance company lobbyist at one of the state’s biggest law firm, also own a 2005 BMW, a 2007 Mercedes-Benz and a 2013 Ford.

Hill’s campaign insisted in an email to The Huffington Post that he drives the Volvo rather than the Mercedes or BMW.

The ad echoes those from other Republican candidates this election cycle hoping to signal that they’re in touch with the average voter. Illinois businessman Bruce Rauner, for instance, proudly sports an $18 watch even though he has admitted that he’s a member of the 0.01 percent of the wealthiest Americans.

Poor ol’ French. He has to drive that hot car home to a $567,000 house (assessor’s value) on Cantrell Road. If he’s too cheap to run the a/c there, he can always drive a few tee shots to the north to the Country Club of Little Rock, of which he is a member. (CCLR initiation fee is $46,000; monthly dues are about $550 or $6,600 a year; drinks, meals, golf cart rental and tips for the locker room attendant are extra.) Given his frugality, you wonder how tight French is at the club. But count on it: If they’d had Volvos at Arkansas Post, this avowed ninth-generation Arkie would still be driving one of them to get there.

Or maybe he could hit up his wife for some help buying a Pepsi. His wife comes from Texas Republican royalty, daughter of the late Billy Mac McKenzie, a fabled Dallas lawyer who was chair of the Texas A&M Board of Regents when George H.W. Bush chose A&M as the site of his presidential library.

Martha Hill, speaking of the family’s frugality, raised some eyebrows the other day in the Heights set when she sent out a tweet of a daughter heading off to “Waldy,” or Camp Waldemar, where socialites from Texas (and Arkansas) have long summered in rural splendor. She made the trip with a trunk that has summered there 13 times. This old Dallas Morning News article gives you a flavor. No biggie. But maybe when Pater French rolls the kids out to talk about how cheap he is on his campaign ads, the kids ought to at least give pop credit for forking over enough for a good summer camp. Waldemar is often described in print as one of the most expensive at around $1,000 $1,500 a week, but it’s far too discreet to post the price on its website.