The Tuesday Little Rock City Board discussion on sharply limiting the hours of Little Rock’s late-night clubs — the subject of our cover story this week — drew a packed house this evening. Most in the audience were employees or owners of the clubs, at least according to the hands raised when City Director Erma Hendrix posed the question to the crowd.

Today’s meeting turned out differently than many expected. It’s impossible to know if the high turnout of interested parties might have affected the discussion, but at the moment, at least, it looks as if the save-5-a.m. camp has the upper hand.

Two separate ordinances were placed on the agenda for the Board’s next meeting, which is next Tuesday (Aug. 19) at 6 p.m.

The first, a proposal drawn up with input from the clubs themselves, would change nothing about closing times but would require clubs to hire more off-duty police officers as private security. (Late-night clubs already retain cops for this purpose, but this would tighten the requirements; it’s in response to the main argument made by the clubs’ opponents, which is that late-night clubs are a threat to public safety.) The second ordinance was forwarded by Ward 4 Director Brad Cazort, who has been studying the issue along with at-large Director Gene Fortson. Cazort’s proposal would shutter the clubs at 2 a.m. on weeknights but allow them to stay open for an additional hour on Fridays, Saturdays and on nights before federal holidays. Although billed as a “compromise” by Cazort, it would essentially be a victory for at-large Director Joan Adcock, who has been the main force going after the clubs these past months. (Adcock’s original proposal — a blanket 2 a.m. closing time all nights of the week — was not discussed as a separate ordinance, presumably indicating that she’ll support Cazort’s measure instead.)

Cazort and Fortson began the discussion. Cazort noted that closing bars at 2 a.m. isn’t particularly unusual; many places have even earlier closing times, including cities larger than Little Rock. He also questioned the economic argument for keeping late-night spots open and provided figures showing the tax revenue the clubs generate for the city has been declining since 2010. Fortson said he’d consulted with the mayors and chiefs of police of other towns that have eliminated 5 a.m. licenses — Jacksonville and Jonesboro among them — and concluded that “basic public safety statistics show we’d be better served by an earlier closing time.”

At the Times, we’d heard that sustained opposition to Cazort’s measure was improbable. The rumor was that 5 a.m. was very likely toast. But then, to our surprise, the rest of the Board seemed to question or outright reject the earlier closing time. 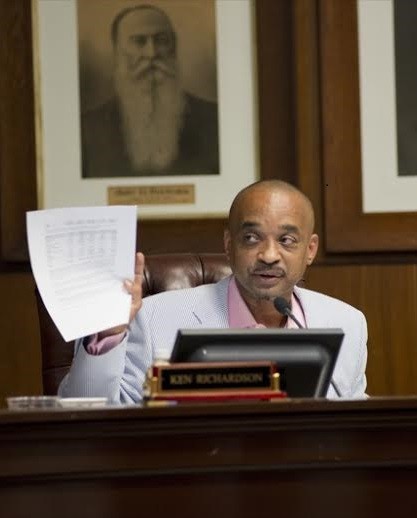 “There have been a number of issues more germane to public safety that we’ve talked about many times,” said Ward 2 Director Ken Richardson. “Abandoned homes, blighted neighborhoods, unemployment and underemployment, disconnected adults and youth … so I think that to couch this as a public safety issue may be window dressing at best.” He also questioned why the Board was so intent to take up the issue now when the late-night clubs have been around for decades.

“On some things we move at a snail’s pace; on other things we can move at the speed of light,” he said.

Richardson said that, “63 percent of the homicides [in 2013] occurred in Ward 2, and if my memory serves me correctly not one of them happened at a nightclub.” And he noted that the sales tax figures compiled by the clubs’ opponents underestimate how much revenue the clubs generate, since they don’t account for alcohol sales.

Ward 3 Director Stacy Hurst, who is running as a moderate Republican for an open state House seat, also indicated she was leaning against Cazort’s ordinance.  “What concerns me is that these clubs have obtained these permits legally and have been operating under these permits for some time,” she said. Ward 1 Director Erma Hendrix, a notorious loose cannon, not only railed against the earlier closing time but also included a pointed jab at her colleagues. “This is an election year, she said, addressing the crowd, “and this is where you use your power…this is what you all will have an opportunity to do, depending on what this Board does with your businesses.” Ward 5 Director Lance Hines said that “business owners have built their business models around these permits” and said he’d prefer to use a “carrot, not a stick” to solve any public safety concerns.

That brings the count to three directors clearly in support of an earlier closing time (Cazort, Fortson and Adcock) and four against it, or leaning strongly in that direction. Ward 7 Director B.J Wyrick recused herself from the discussion at the beginning, citing a conflict of interest; her son-in-law works for a law firm retained by one of the clubs, she said. The remaining two directors, Doris Wright and Dean Kumpuris, seemed less certain of the direction of their votes, but their comments were generally more sympathetic to the clubs than to Cazort and company. On a motion to place the pro-club ordinance on next week’s agenda, all but Cazort, Fortson and Adcock voted yes.

However, Cazort’s ordinance also made the cut, with a voice vote. Cazort originally wanted his proposal to sit on the agenda for several weeks running before the Board actually takes a vote — to allow for ample public discussion, he said. Now that both proposals are sitting on the agenda next week, though, his hand may be forced.