Arkansas cops and sheriffs have joined the binge of picking up military surplus equipment for a song, including the enormous MRAPs — mine-resistant armor protected personnel vehicles that can weigh 20 tons. Marshall calls it “Hollywoodization” of police. You do get the feeling that these are often big-boy toys — by their loving paint jobs and display at community events.

As a number of Iraq and Afghanistan combat veterans have been noting over recent days, they generally managed crowd control situations in these quasi-war-zones with less body armor, less visible firepower and more restrictive rules of engagement than the Ferguson PD appears to be using against overwhelmingly peaceful and almost exclusively unarmed civilians in Ferguson.

This isn’t to say US military patrols haven’t been heavy-handed in many cases and even committed some atrocities. But it’s also worth remembering that US military patrols actually were targeted with insurgent ambushes – either with IEDs or heavy firepower.

Regardless, what we are seeing here in many cases is the widespread use of military or quasi-military hardware without the tactics the actual military gets trained in in crowd control, riot control and various ways to try where possible to deescalate crowd situations.

When I picked up the Bryant photo of its heavy armor yesterday, I posted a question about a Facebook comment from the police that said “it’s great to be prepared for all circumstances.” I asked what circumstances were anticipated and whether it had been used. The response:

Max, it was just put into service last week. It will have several uses from using it for flooding situations to rescue people, to be used for our swat and tactical officers during call out to transport the team.

I dunno. I think I’d opt for a boat over heavy armor in high water. And I’d guess a Tahoe or similar SUV, of which the Bryant police also have a few, could quickly deliver a carload of cops to a riot scene on Black Friday at the Walmart.

But this is about more than heavy armor. The photos from Ferguson — police dogs straining at leashes against people doing no more than walking and speaking; heavily armored cops in armored vehicles with weapons trained on unarmed people — are chilling. Said a local law enforcement friend: “Didn’t we learn anything in Birmingham?”

Go back to Wendell Griffen in the early morning post and his comments on a smarter way to confront episodes such as Ferguson, Mo., faces. Honor the law. Release public information without fear or favor. Honor the Constitution. Allow peaceful assembly and speech, even speech disrespecting of police. It might breed some respect where it is currently lacking. Don’t presume police critics are the enemy. Escalation of firepower encourages escalation of firepower.

ALSO: Here’s more on the unbelievable amount of federal money that has flowed into local police from Homeland Security since 9/11, a disaster perpetrated by criminals with box cutters. And this is on top of nearly a half-billion in military surplus distributed to local police in 2013 alone.

ALSO: This photo of the “troops” and equipment deployed in Ferguson is astonishing. Putinesque.

ALSO: This stuff is all over Arkansas, not just in Bryant. The Pulaski sheriff has one of these mine-resistant babies, too, should it get rough out at Little Italy some night. 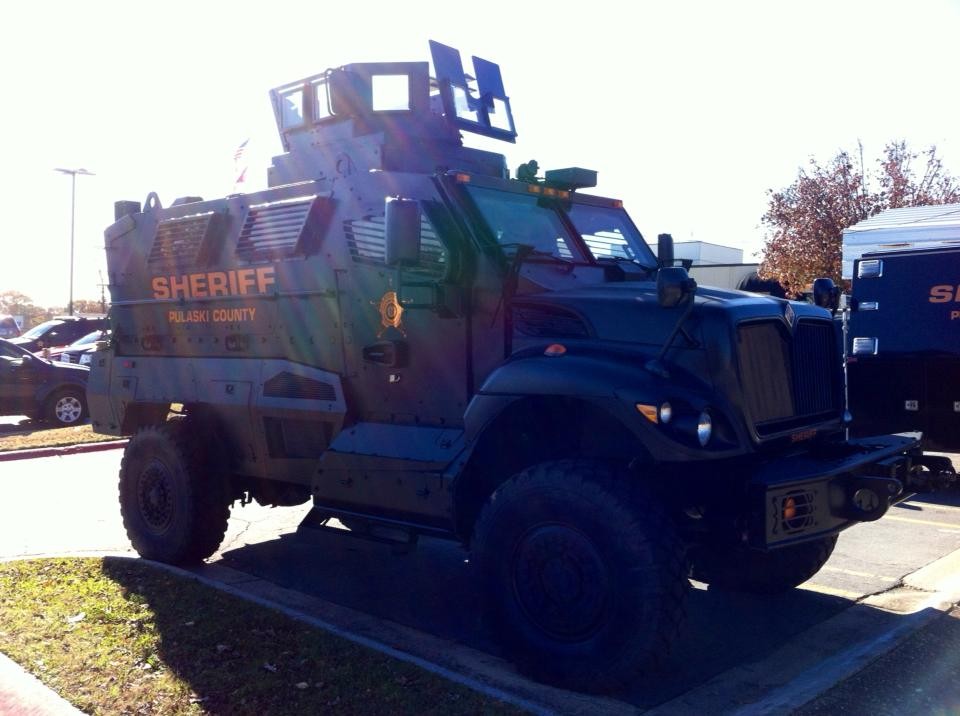