The police officer involved in the fatal shooting of an unarmed teen in a St. Louis suburb has been identified as Darren Wilson. Ferguson Police Chief Thomas Jackson, who released the name to reporters today, said Wilson has been a police officer for six years.

Michael Brown, an African-American teen, was shot to death Saturday. Police have said the shooting occurred during a struggle for the officer’s gun. Witnesses have said Brown’s arms were raised when he was shot.

He should have been identified days ago. He should be extended the same rights all of us deserve, even though some of those were abridged during the previous week of bad judgment in Missouri.

According to a Ferguson police report released this morning, Brown was the primary suspect for an alleged robbery which took place shortly before the shooting. In addition to a 16-page incident report, the police released two still from surveillance footage, allegedly of Brown in an altercation at a convenience store over stealing a box of Swisher Sweet cigars. According to the incident report, Brown allegedly asked for Swisher Sweet cigars, handed them to Dorian Johnson (who would later witness the fatal police shooting) and then attempted to leave without paying; the Quik Trip called 911 and attempted to stop them, but Brown allegedly “grabbed [him] by the shirt and forcefully pushed him back in to a display rack.” Talking Points Memo has more.

Here is a picture of a key page from the incident report tweeted out by the Huffington Post’s Ryan Reilly (one of the reporters arrested Wednesday night in Ferguson): 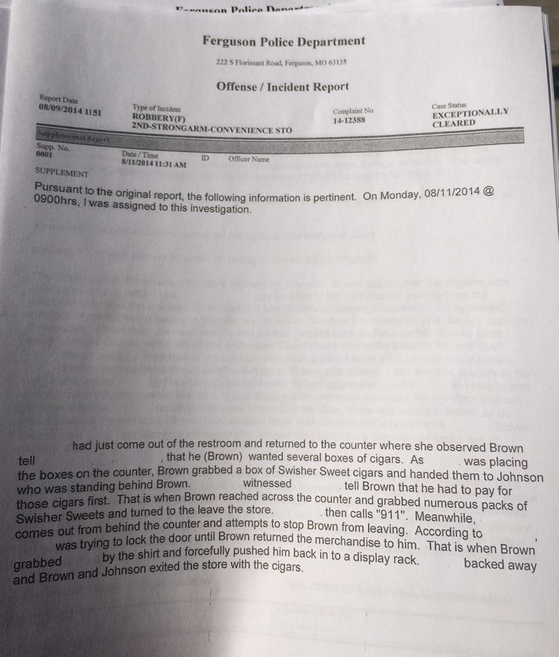 This should go without saying, but the issue remains what happened when Brown was fatally shot by a police officer. Whether or not Brown was a suspect for stealing cigars from a convenience store, the use of deadly force is illegal — not to mention horrifying and wrong — if Brown was in fact surrendering with his hands up. On that front, the only new information is the identity of the officer. As Wesley Lowery of the Washington Post (another journalist who was arrested Wednesday night) notes, the information handed out today was exclusively about the alleged robbery, not about the shooting: 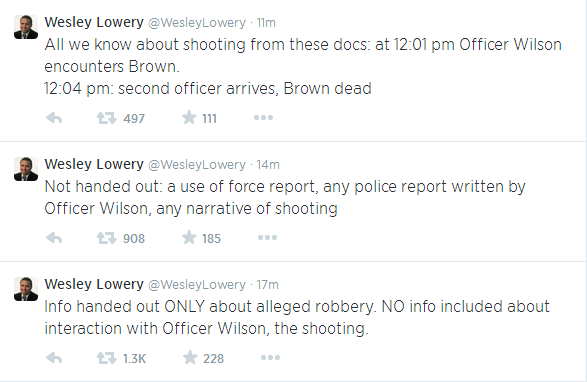 Matthew Yglesias at Vox asks a good question. If Johnson was Brown’s accomplice in the alleged robbery, why has there been no attempt to arrest him?

Another question: had Wilson identified Brown as the suspect at the time of the shooting? I’ve seen nothing in the incident report on this. The incident report at one point states that the police identified Brown as the primary suspect after the fact: “After viewing Brown and reviewing this video, I was able to confirm that Brown is the primary suspect in this incident.” However, this is not Wilson writing (it may be Ferguson police chief Thomas Jackson — I’ve asked Lowery and Reilly). Did Wilson know Brown as the suspect when he stopped him? Jackson did say a description of the suspect had been circulated prior to the shooting. The alleged robbery was over at 11:54. Wilson stopped Brown seven minutes later at 12:01. By 12:04, when the second officer arrived, Brown was dead. 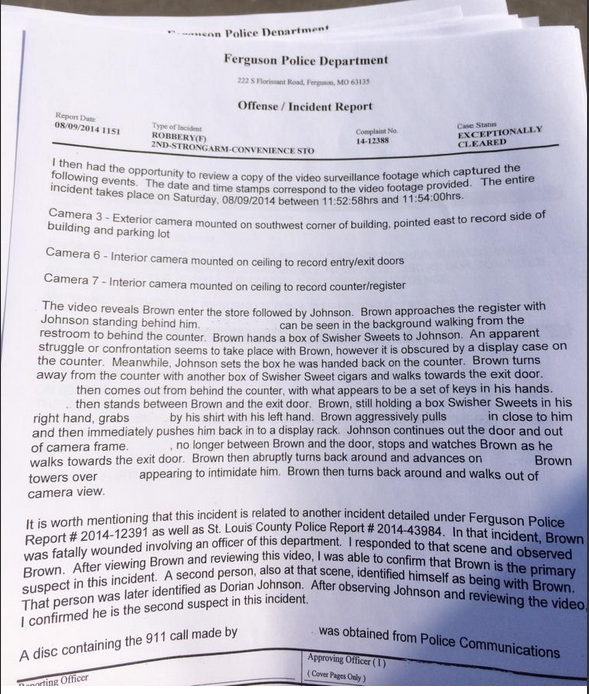 UPDATE 2: The AP reports that Wilson did not know that Brown was a suspect at the time of their interaction and that the alleged robbery “was not related to the initial contact,” according to Ferguson Police Chief Thomas Jackson. Jackson said that Brown and Johnson were stopped “because they were walking down the middle of the street blocking traffic.”

So…why did the Ferguson police department make a big to-do of releasing the incident report on the alleged robbery this morning if it was “not related” to the shooting? The New Republic’s Brian Beutler has a good run-down on how badly Ferguson PD appears to be handling this.