Sen. Jason Rapert is the bogeyman Arkansas Democrats love to hate. He calls for the president’s impeachment, suggests that it’s “treasonous” to give medical treatment in the U.S. to American missionaries who’ve contracted the Ebola virus, rails against “the radical homosexual lobby and pro-abortionists” — and that’s all before he’s had his breakfast in the morning. He was the man behind the unconstitutional 12-week ban on abortion, a bill which in its original form would have required women to undergo an invasive transvaginal probe. In full demagogue mode, the camera-loving lawmaker famously said “we’re not going to allow minorities to run roughshod over what you people believe in” (Rapert insisted that he was talking about political minorities; the full speech in context suggests he was talking about religious minorities).

Rapert, in short, is no stranger to controversy — but do all of the hijinks make him vulnerable? Can Rapert, a talented politician with a strong base of support in his district, be beaten in his bid for re-election to state senate?

Tyler Pearson of Conway, a 28-year-old analyst at Heiffer International challenging Rapert, thinks so. “This is absolutely a very winnable race,” said Pearson. “We’re outworking our opponent, we’ve knocked on more doors, we have a cash-on-hand advantage, we’ve outraised him four of the last five months, we have a much larger grassroots support…it’s a testament to how passionate people are about this race. It’s possible not just because of what I’m doing but because of what the community is doing.”

Pearson was joined by Gov. Martin O’Malley of Maryland — in town for the Southern Governors Association meeting — for a press event at Trio’s today, discussing pre-k education and raising the minimum wage.

“Study after study shows that just about nothing goes further to improve the quality of life for our young people than a quality childhood education, and it starts with pre-k,” Pearson told a crowd of about 40 supporters. On the push to raise the state minimum wage to $8.50, an initiative which will likely be on the ballot this November, Pearson said, “Arkansas has one of the lowest minimum wages in the country — that’s just not right. … My faith leads me to believe that we should help folks get ahead in life, especially those who are working hard.”

O’Malley praised Gov. Mike Beebe, natch, calling him “one of the most pragmatic, entrepreneurial, forward-moving governors.” He called Pearson a “rising star…part of that new generation of leadership.”

O’Malley said that a failure to invest in early childhood education would “cost you a hell of a lot more down the road” and described his experience as mayor of Baltimore, where a pre-k expansion led to improvements in reading and math scores when the children got to elementary school. O’Malley also stressed the importance of raising the minimum wage. “We don’t believe, whether we live in Maryland or Arkansas or places in between, that if people work hard and play by the rules, that they should have to raise their children in poverty. That’s not the America we were raised in, and it’s also not the way we grow our economy … For the better part of 30 years, we’ve been sold this false story that somehow prosperity trickles down from the top. … A stronger middle class is the cause of economic growth, not some luxury we can afford when the stock market is booming.”

A strong pitch well delivered, and you can see why O’Malley is often cited as a possible presidential candidate down the road. Still, while O’Malley gets Democratic politicos excited, he’s not likely to move the needle in this race (I was the only press at this event, billed as a press conference). Pearson clearly has energy and an enthusiastic base of support, but he faces an uphill battle taking on Rapert.

Sen. Joyce Elliot, who was in attendance at today’s event at Trio’s, said Rapert’s seat was “absolutely” a possible pickup for Democrats. “When the incumbent has had a chance to serve, people know who that person is,” she said. “And they can make a determination — if you have a very good candidate who can define himself, and that’s exactly what Tyler has done. People understand the principles that he stands on.”

Elliot, who first met Pearson when he worked on one of her campaigns, described him as passionate and hard-working. She predicted that Rapert’s noisy stances would rally the Democratic base to a strong turnout.

“My opponent has embarrassed our district over the last two years that he’s been in office,” Pearson said. “I think he’s a different candidate that’s running in 2014 than 2012. I’ve had several people tell me that they voted for him last time but won’t vote for him this time, because they didn’t get what they voted for. They thought he was going to be a moderate and fiscally conservative candidate who focused on the issues that mattered to our district. But it seemed that all he cared about was getting in the spotlight and focusing on himself.”

Pearson continued: “The word that I hear everywhere I go is ’embarrassment’ — that Jason Rapert is an embarrassment to our district and our state. And people don’t want to be embarrassed. I understand that. I felt embarrassed. That was one of the big reasons I got in to the race is I was unhappy with my political representation and I didn’t feel like my state senator was focusing on the issues that matter to our district.”

p.s. Arkansas Times favorite Bonnie Montgomery got a shoutout. Pearson gave O’Malley a copy of her new CD, noting that he had just seen her play at “one of our favorite watering holes,” the White Water Tavern: 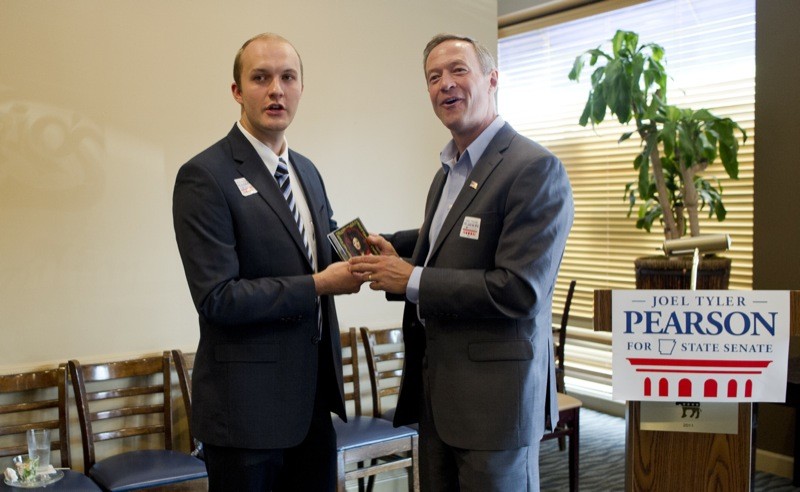