Gov. Mike Beebe, as well as governors from Maryland and Kentucky, discussed health care reform and the private option – the unique Arkansas version of Medicaid expansion – at a panel this morning at the Southern Governors Association meeting. Earlier today, I noted Beebe’s strong prediction that the private option will continue to survive politically in the state. Here are a few other highlights from this morning’s meeting:

*OBAMACARE, Y’ALL: The most striking thing about a discussion among Southern governors about Medicaid expansion is how few Southern governors showed up. There was Beebe and Gov. Steve Beshear of Kentucky, along with Gov. Martin O’Malley, if you’re wont to think of Maryland as the South. One of the big stories in terms of the implementation of the Affordable Care Act was the near-total resistance in the South – save for Arkansas, Kentucky and West Virginia – to Medicaid expansion. It remains striking to look at the map, with Arkansas green in a sea of gray:

Via: The Advisory Board Company

In terms of the goals of the ACA to expand health insurance coverage to the low-income Americans most in need, this was a disaster. Many of the refusenik states were the nation’s poorest; many were those with the highest rates of uninsurance. They were also among the unhealthiest: 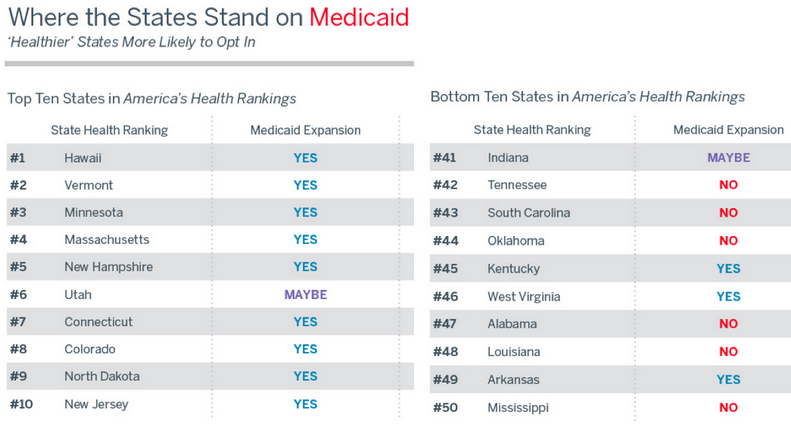 In this context, Kentucky and Arkansas were the South’s outliers, the biggest Obamcare success stories. Over the first half of 2014, Arkansas saw the percentage of uninsured citizens cut by 45 percent; Kentucky by 40 percent  — the two biggest drops in the nation in 2014.

Beebe acknowledged that Medicaid expansion was a tough sell in the South given the “animosity that exists in our state, and most Southern states, about the president and the Affordable Care Act.” That made for a “virtual impossibility,” he said – but argued that the state took a pragmatic approach that led to a better deal for Arkansas than the middle-finger federalism of neighboring states like Louisiana. (Regarding an interview he did with a Baton Rouge radio stations, Beebe said, “I didn’t really want to trash Jindal, but I didn’t want to lie.”)

*ARITHMETIC: So what did Jindal and co. get wrong, according to Beebe? Beebe’s pitch – familiar to anyone that followed the Medicaid expansion debate in Arkansas — was that it came down to “basic arithmetic.” State taxpayers and local hospitals (in the form of Medicare reimbursement cuts) are paying in no matter what. Turning down Medicaid expansion means the state gets nothing in return. Beebe: “You’re going to pay for it and your people are going to pay for it – why not take it? Why send our money to California or New York and leave our people out, our hospitals out?”

Not exactly a stirring moral argument, but I think Beebe’s instincts are correct that the parochial appeal is ultimately what will sway states to expand Medicaid going forward. Opponents of Medicaid expansion like to clarify that there is not literally a pot of money that Arkansas would turn down and would then be shipped off to another state. In states that choose not to expand Medicaid, those federal dollars simply aren’t spent. But the point remains that states that decline Medicaid expansion are paying in to help fund the coverage expansion in other states but missing out on the federal Medicaid dollars in return. In practice, Medicaid expansion has worked out to a national redistribution of funds to states that said yes.

Barbara Lyons of the Kaiser Family Foundation, also on this morning’s panel, said that Kaiser had estimated that the 12 Southern states not expanding Medicaid — in addition to leaving 5 million people without coverage — are foregoing about $316 billion over the next 10 years, including $127 billion that would have gone to hospitals. This is where I predict the breaking point will likely come – states deciding that it is not politically viable to cut off their nose to spite Obama’s face.

PRIVATE OPTION v. MEDICAID EXPANSION: Beebe trumpeted some of the benefits of the particular benefits to states of the Arkansas approach, which uses Medicaid funds to purchase private health insurance for low-income Arkansans, rather than simply placing them in Medicaid. Beebe noted the impact on the overall private health insurance market, as well as the additional revenue stream generated by the state’s already-existing premium tax levied on private insurance companies. By adding in the neighborhood of 200,000 customers, the state was able to generate additional tax revenue to help offset the eventual costs of the coverage expansion once the state has to start chipping in.

IMPACT ON DISABILITY APPLICATIONS? Also participating in today’s panel was Sen. Jonathan Dismang, one of the key Republican architects of the private option. Dismang said that he had recently gotten data that adult applications for SSI disability had fallen 13 percent in the first half of 2014 compared to the first half of 2013 (after increasing for the past seven years). Dismang was hopeful that the private option might be contributing to the drop. The theory is that some people may file for disability in part because they simply can’t manage their medical expenses; if their health insurance is covered, they will be less likely to file for disability as a desperate measure and more likely to stay in the workforce or seek a job. “There was always a push that we would be able to tie this to workforce development in the state,” Dismang said. Obviously there’s not enough detail here to speculate on preliminary data — and an improving economy is another possible factor — but something to watch.

MAKING MEDICAID MORE REPUBLICAN: We’ve noted many times that part of the negotiation process in the wake of the Supreme Court’s decision to punt the Medicaid expansion question to the states is an effort by some Republican lawmakers to try to move the Medicaid program in what they view as a more conservative direction. That’s clearly how Dismang views it, and he said those efforts will continue:

The Supreme Court ruling created a little hole in the wall. What we did in Arkansas is we tested the elasticity of that hole, and stretching as far as we can. I understand there’s a point where that breaks, but I don’t think we’re there yet. And I think, from the federal level looking down on what’s happening in Arkansas, they may not approve of everything we’re doing. I think you’ve seen some of the articles that have been written by maybe some of the more liberal leaning folks that don’t appreciate what’s happening here. But we’ll continue to push and see what we can do.

TERRITORIES: Also in attendance were leaders from further south than Dixie: Puerto Rico Gov. Alejandro Garcia Padilla and Virgin Islands Gov. John de Jongh. They chose to expand Medicaid despite much lower federal matching rates, around 50 percent. Pretty interesting story, actually, that I’d love to see more reporting on: the effort of the U.S. territories to be classified as states under the Affordable Care Act in order to get the full benefits of the law. It seemed a bit surreal to the territory governors that many governors in the U.S. were resisting the very funds and benefits they were seeking.