The Weekly Standard loves Tom Cotton. It loves anybody who loves Tom Cotton. So it loves John Goodson, the multimillionaire class action lawyer from Texarkana who once favored Democrats and has been favored by Democrats such as Mike Beebe with the likes of a UA Board of Trustees appointment.

And it REALLY loves that John Goodson is backing Tom Cotton.

John Goodson, a prominent Democrat from Texarkana, is a friend of Pryor and his father, David Pryor, a one-term governor and senator for 18 years. Goodson serves on the University of Arkansas board of trustees with the elder Pryor. He says the Pryors are “fine men.”

But the “people of Arkansas have changed a little to the Republican way of life,” he says. Obama has “hurt the Democratic party .  .  . and that’s got to be tough to turn around.” Goodson supports Cotton and thinks he’ll win. “What’s made the race as close as it is,” he says, are the Democratic ads against Cotton.

Goodson is married to Supreme Court Justice Courtney Goodson. She was once viewed as a Democrat, or at least a Democratic sympathizer. But that’s when she was relying on the solid Democratic and Clinton connections of the family of her former spouse, Mark Henry of Fayetteville, to get elected in the first place. She’s aiming to run for chief justice in 2016. She, like her current husband, sees a tide running in a different direction. This doesn’t bode well in several pending legal challenges before the court, including the Republican Vote Suppression Act (voter ID) that could be crucial in a tight race for Senate if it is allowed to be in effect in the general election. It disqualified hundreds of Democratic voters in a lightly contested primary election. If it does the same in a heavily contested general election, that will be good for Tom Cotton. What’s good for Tom Cotton is good for John Goodson and, well ……

Among the people shaking heads at this turn of events are some old Democrats like Billy Roy Wilson, who mentored the young Goodson. 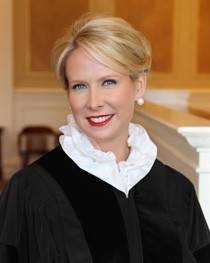