Shelton reports that the divorce cases of soon-to-be-defrocked Judge Mike Maggio and his political patron and former senator, Gilbert Baker, are totally under seal (Baker’s was filed, but apparently never concluded and the case was dismisssed). It is if they don’t exist. There’s no record in the circuit court record of their existence, but Shelton found a few threads including a transcript of a hearing that outlined some discord in Baker’s marriage on account of visiting restaurants that serve alcohol. The sealing of these records is contrary to just about all legal authorities’ understanding of open court.

Shelton’s article has one point with which I’d quibble. She quoted two legal authorities as saying they’d never heard of the total sealing of another divorce case. She need only to look to the archives of the Arkansas Times to find at least one other — and it also happened in Faulkner County. And, as with the case of Maggio’s divorce, the sealing was done by a future member of the Arkansas Supreme Court. Judge Rhonda Wood did the favor of giving Maggio secrecy no other divorce litigant can expect to get outside of Faulkner County. Judge Karen Baker did the honors for millionaire Charles Morgan back during his 1997 divorce. 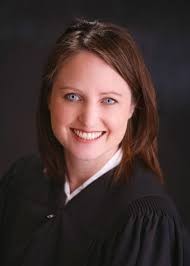 First, an embarrassing admission. I’ve known for some time about the sealing of Maggio’s divorce case. I intended to make an issue of it had he made the ballot in a contested race. I had raised questions about it with his former political consultant. It is not the only funny business pertaining to Maggio’s tenure or his first brush with ethically questionable conduct. But he’s been barred from hearing cases and will never be a judge again. So there’s that.

But back to another case of Faulkner County injustice.

The original reporting in the Times is not readily accessible, but I recounted it in this column in 2010, when Baker won a race for Supreme Court.  I did some pro se lawyering of my own, unsuccessfully, in the matter in 1997. As I wrote in 2004:

The issue was a divorce case involving one of the most powerful men in Conway, Charles Morgan, the leader of Acxiom Corp. The divorce case, which the Times was covering, touched on corporate financial issues. When Morgan moved to close the record in the case, I filed an objection. The judge never acknowledged my motion. Perhaps influenced by the public interest in the case, Morgan moved to settle the divorce case. He and his wife came to terms in an order signed barely a week after my open court motion. The file remained sealed. I asked Judge Baker to open it. She said my request was moot, though, by law, it was not. The legal offense, in my view, was that the judge sealed the entire file, even though the hearing that Morgan feared might reveal sensitive information never was held. The judge sealed the boilerplate original divorce pleading. She sealed her final divorce decree. You can look through tens of thousands of divorce cases in Arkansas and not find a single one handled with the secrecy Baker ordered in this case.

I contested her finding of mootness. The judge ignored my pleading for five months. Her staff would not talk to me about the status of my motion. After yet another letter reminding her of her duty to rule, she finally relented. She brusquely dismissed the open court motion, more than a year after it had been filed. She said there was little value in hearing evidence in private if the order that resulted could be open to public scrutiny. She said further that the initial pleading and the final divorce decree in this case “do not concern any public interest and at the request of all litigants should remain private.”

So the law, as interpreted by a future Supreme Court justice, is that anybody seeking and receiving a divorce is entitled to total secrecy if they ask. The case is of no public interest.

Alas, the Times didn’t have the resources to take this unbelievable ruling up to the Arkansas Supreme Court. Perhaps we should have. It appears to be continuing law in Faulkner County. Maybe the Democrat-Gazette, which has done yeoman legal work in the interest of public information, perhaps could put Williams and Anderson to work in Faulkner  County on bringing some sunshine to the courthouse.

As I wrote in my brilliant pleadings to Judge Karen Baker at the time, courts serve the public, not their litigants. The public record of their action is the only means of accountability we have. Yes, some matters, particularly involving children, may be sealed as to specific hearings and documents. But the record that a divorce case was filed, that a decree was entered and that orders exist — enforceable by the public’s court — should be open to the public. How else to know if orders were followed? People with connections and money should not be afforded privacy not available to everybody else. From Shelton’s article:

Michael Flannery, a distinguished professor of law at the University of Arkansas at Little Rock’s William H. Bowen School of Law, said, “I have not experienced in my 25 years of divorce practice [a case in which] an entire record of a divorce [was] sealed.”

Longtime divorce lawyer Barry Coplin of Little Rock said he, too, had never heard of a divorce case being sealed to that extent.

“Everybody ought to get the same treatment, regardless of their status in life,” Coplin said.

The problem here could be that Coplin practices domestic law mostly in Pulaski County, not Faulkner County.

A personal disclosure: Shelton’s article notes that someone well-known to me, my wife and retired judge Ellen B. Brantley, “presided over” a divorce case sealed earlier by Judge H.G. Foster. It involved Deputy City Attorney Chuck Clawson, son of another Faulkner circuit judge.

I asked her about the case this morning. She took the case on special assignment. She said she had no idea the case was sealed. She says, for the record, that she routinely accepted an uncontested divorce agreement in the case. She said she doesn’t seal divorce decrees and did not order that the decree in this case be sealed. If her confirmation of her order be objectionable to parties, they know where to find her.