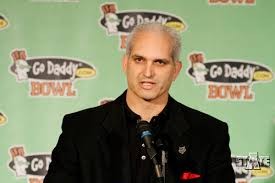 Terry Mohajir, the athletic director at Arkansas State University, has not covered himself in glory in response to the matter of Christian crosses being made a part of uniforms of the ASU football team this year.

As reported yesterday: Complaints were made and the university legal counsel advised the athletic department that crosses should be removed as helmet decals. They were part of a memorial tribute to a former player and equipment manager, who will still be memorialized by initials on each helmet.

Mohajir is put out about it. He appeared on The Buzz this morning, to whip up the yokels who listen there and happily chomp at bait thrown by yokels like David Bazzel. He, his coaches and his players are “not happy” about the decision, Mohajir said. “But we will obey the law.”

Got it? The well-paid chief executive of a multi-million-dollar department financed by public tax money is grudgingly willing to obey the law, otherwise known as the 1st Amendment of the U.S. Consttution. But he is NOT happy about it.

This is a classic no-brainer, though brains were apparently in short supply at ASU until some images of the cross-bedecked team appeared on national television and some people with brains saw them.

Football — and Christianity — conquer all in these parts, of course. The radio bozos are working up players to raise an insurrection. They seem to want to encourage them to scrawl crosses, Bible verses and other such on themselves. Fine. I believe the companies that underwrite college football gear don’t like people messing with their carefully designed packages, however, so tats and adhesive tape messages are better advised than uniform alteration. And by all means the players and coaches may pray to whatever God that made them. He has a lot of games to look after so there are no promises that prayers will be answered with victory, however.

When I wrote about this yesterday I mentioned an ASU neighbor. I referred to the Greene County School District’s defiance of the constitution a few years ago in refusing an ACLU request to stop an annual nativity scene erection in elementary classes. That drew a response from a Terry Mohajir fan. Wrote Lance Ritter to me:

I want you to know that I am a patron of the Greene County Tech district and I support GCT and the stand they took. I wish ASU had the guts to fight this issue like GCT did. Mr. Noble did not back down from you or anyone else on this issue. We need more people in public office like him.

When I said there are people intent on cramming THEIR religion down the throats of others, I did not say it lightly. At least Mohajir has decided not to force a constitutional crisis over football helmets, much as he might wish to do so.  But Lance Ritter is ready to take up the battle. Onward Christian soldier.

Somehow, John Prine comes to mind. About flag decals not getting you into heaven.