Good piece in Politico from Stanford sociology professor Doug McAdam on the roots of our modern partisan divide. McAdam tells the familiar story of how the South flipped, as yellow dog Democrats in the old Confederacy abandoned the party in the wake of the Civil Rights movement, and what was viewed as the betrayals of presidents Kennedy (already suspicious to the segregationist South) and Johnson (a traitor to Dixie).

The piece is titled “Race and the Modern GOP: Let’s not kid ourselves. Today’s deep divides are due to the civil rights movement.” On some level I think it’s helpful to separate the questions of how political realignment came to be and the question of race as a factor in today’s GOP. Perhaps they’re inseparable. I’ve often heard Republicans, in arguing that Southern Republicans today are not driven by racist ideology, seek to deny that the political realignment in the South began because of an exodus based on racist ideology. The Party of Lincoln didn’t become a party that struggles to capture a tenth of the black vote by accident. Southern Republicans today are of course not inherently racist; but denying how Republicans came to dominate the South is simply ahistorical. Republicans who try to whitewash the history end up casting more suspicion on their own claims.

Lots of good history in the McAdam piece. Still striking to look at the map of Eisenhower’s rout versus Johnson’s. 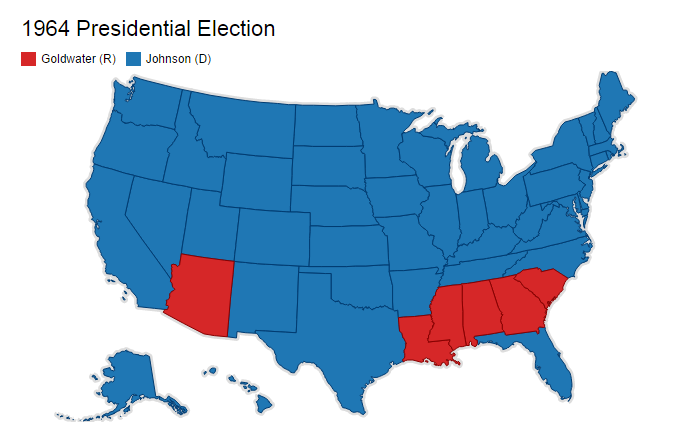 This chart below comparing the Senate in the 85th (1957-1959) and 89th (1965-1967) sessions of Congress is also striking. Unfortunately, the chart is labeled contentiously, describing progressive views on race as “liberal” and regressive views on race as “conservative.” But you get the gist: the chart tracks members of the Senate who tended to be in favor of measures to create racial equality in the United States, and those who tended to be against. The Civil Rights Act of 1957 passed largely because of Republicans; by the mid-60s, many of those racially progressive Republicans were gone. Meanwhile, there were almost no Republicans in the segregationist/white-supremacist wing of Congress in the late 1950s, but they were a force to be reckoned with by the mid-1960s.

Here’s McAdam, on the ripple effects both in the South and in the rest of the country as it became clear that there were white voters unhappy with the Civil Rights movement there for the taking:

Seeing an opportunity, an increasing number of Republicans began to embrace more conservative racial politics designed to appeal to Wallace supporters throughout the country. “If an individual wants to discriminate against Negroes or others in selling or renting his house, it is his right to do so,” said Ronald Reagan during his 1966 campaign for California governor, in which he also decried welfare and opposed government efforts to encourage neighborhood integration. …

Nixon, the Republican nominee, was thought to have been washed up as a serious contender when he was soundly beaten in the 1962 California gubernatorial race. And yet, here he was six years later, running for president on what he explicitly termed his “Southern strategy.” The Democrats had lost much of the South in 1964, but Nixon now believed that the entire region was up for grabs—and he sought to take advantage.

Obviously, this was a nasty business. Some Dixiecrats, like Strom Thurmond, dramatically switched sides, becoming conservative Republicans, the future core of the party. Other white supremacists stuck with the Democratic party for years to come. But the trends that would come to define our political landscape were beginning to take root, as you can see from Goldwater’s stunning popularity in the segregationist South. This would lead, for better or worse, to a re-shuffling in Congress into more clearly coherent ideological divides between the two parties. It would lead, for better or worse, to the dominance of the GOP in the South, in some places a near-flip — the same old one-party rule in Dixie, just the other party. And it would also lead, for better or worse, to a national Republican party anchored by and rooted in the South.

None of that means that today’s Republican party must necessarily be defined by the ugly past (any more than today’s Democratic party must necessarily be defined by, say, a New Deal coalition which both depended on, and aided and abetted, the segregationist South). And of course the modern South itself need not be defined by its own ugly past. But all of us — Southerners, Democrats, Republicans — will better be able to reckon where we are today if acknowledge and confront the history.