Former Republican congressmen John Paul Hammerschmidt and Ed Bethune have written the Arkansas legislature urging members to review an environmental regulation that would prohibit future large hog feeding operations in the Buffalo River watershed. It wouldn’t apply retroactively to the controversial C and H hog farm that Cargill is supporting on a Buffalo River tributary in Newton County.

For reasons unclear, the legislature hasn’t moved to review the proposed rule to guide the Pollution Control and Ecology Commission. A moratorium on such feeding operations in the watershed expires Wednesday. The six-month moratorium was put in place so the legislature could review the proposed permanent rule change. Because of the lack of action, an administrative law judge has recommended an extension of the moratorium for six months.

There’s broad public support for protection of the Buffalo River, as he letter from two former Republican congressmen notes. But the powerful agriculture lobby is not a fan of environmental regulation. The failure of the legislature to move on this issue is likely related at least partially to that. 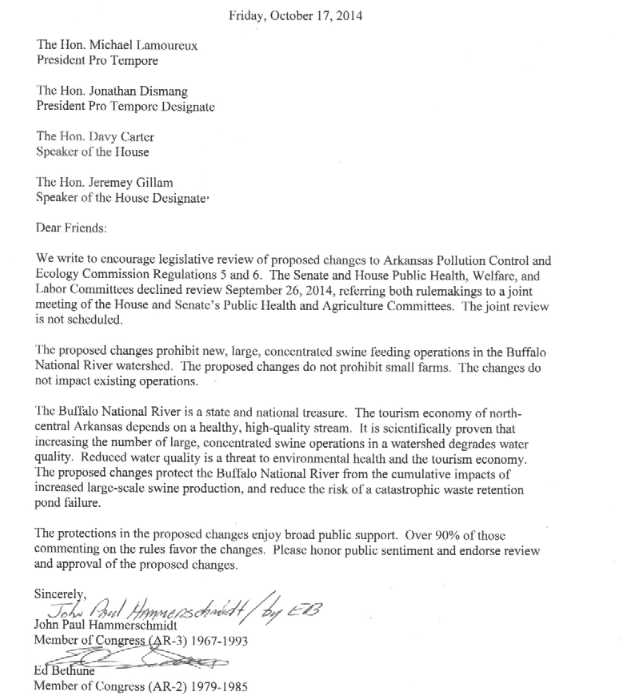 David Ramsey reminds me of coverage of an earlier punt of this issue in the legislature and Farm Bureau opposition. Protectors of the Buffalo River would like to get successful review of the rule by the legislature before a full legislative session in January when the full-time agri lobbyists can muster even more opposition and other noise will hide their effort to leave the Buffalo unprotected.