Sen. Jason Rapert talks a lot about honor and integrity. If only he had any.

Check this from Wes Craiglow, a Conway city employee. Rapert had once professed to support some of Craiglow’s ideas for Conway development. Then he found out Craiglow was a campaign supporter of Tyler Pearson, the Democrat making a valiant run against the strutting Republican demagogue.

It’s all about quid pro quo for Rapert. You don’t support me; screw your community-improvement ideas. Writes Craiglow:


It’s important for Conway residents to know as much as possible about the people for whom they may choose to vote, so after a few days of consideration, I’m making the choice to share this Twitter screenshot.

Based on this message I received from him last Friday morning, Jason Rapert is likely to remove his support from the important work we do at the Conway Planning and Development Department because one of our staff members–namely, me–is supporting his opponent, Tyler Pearson. (In full disclosure, I have a Pearson sign in my yard and I re-Tweeted his campaign video one time last week. Until right now, that has been the extent of my visible support to him.)

Mr. Rapert’s veiled threat towards me is undignified, and it sullies the nobility of a state senatorial position that my own grandfather honorably held for many years. I am saddened that he would compromise one of the core tenets of public service, selflessness, by so plainly placing his own interests above the interests of our community.
No matter who wins the District 35 race, our team at Conway City Hall will continue to focus on making this city great, and we’ll keep an invitation open for our elected officials to be involved whenever and however they choose, irrespective of any personal differences we may have.

Rapert professes to be unworried about Pearson. He tells people he has an insurmountable lead. He might even be right. But it takes a worried man to sing a worried song. If more people were fully informed about Jason Rapert, he’d have good reason to be worried. 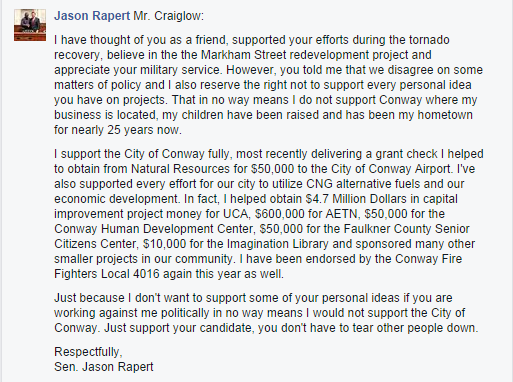 To which Craiglow fired back:

Thank you for the things you mention above. I honor and respect much of what you’ve done for our community.

I want you to know that if you choose to not support my ideas, that’s fine by me. We all win some and lose some. I get it.

The issue here is that you’re clearly making your support of my ideas contingent upon my choice at the poll. That’s called a quid pro quo offer, and it has no place in public service.

As public servants, we do things because they’re in the best interest of our citizens, not because we have something to gain personally.

I’m happy that people will have the chance to read this dialogue and make up their own minds. Thank you for sharing your thoughts.

This is the kind of measured talk you WON’T get from Rapert. Rapert responded again and made no denial of Craiglow’s suggestion of a quid pro quo dynamic. “[P]eople are pretty smart and they know the dynamics I have explained,” he wrote. “Perhaps you are just upset I don’t support some of your ideas,” Rapert wrote, without explanation. Rapert added that he would “leave it at that” — but Bro. Rapert rarely does, so it might be worth checking back in at Craiglow’s Facebook page for further fireworks.