A shadowy conservative group whose chief political aim includes protecting the anonymity of big-money donors to political races has dropped $1.8 million into the race for Arkansas attorney general.

Ads by the Center for Individual Freedom are the underhanded kind that have become familiar in politics today. They make, in end-of-the-world-tone, misleading harsh attacks on a candidate, but lack the “express advocacy” words that make them the sort of advertising for which some minimal financial disclosure is required. Center for Individual Freedom enjoys 501c4 status under federal tax laws. As long as it avoids express advocacy it can go about its very political way without disclosing where it’s money comes from.

Tim Cullen, on the losing end of similar clandestine attacks in his unsuccessful race for Arkansas Supreme Court last spring, has posted a relevant comment about the latest on Facebook.

I just saw the hit piece against Nate Steel by “The Center for Individual Freedom.” It gives a phone number to call to tell Nate to stand up for children, not sex offenders. It is eerily similar to the bogus ad in my Supreme Court race put out by the Law Enforcement Alliance of America. I’ll wager the “Center for Individual Freedom” has no members in Arkansas, and won’t reveal who funds their ad campaigns. Nate Steel has explained the votes that they reference in the ads. Those votes don’t make him anti-children, or pro-sex offender, and the very suggestion is preposterous. It is the equivalent of an ad saying a candidate tortures puppies. Ironically, the “Center” claims their mission is to protect individual rights and freedoms, yet the ad lambasts Nate for failing to vote to further restrict those rights. The bottom line is this is a phony issue.

Like the LEAA, this stealth PAC “Center” is cynically exploiting child sex crimes to try to score the cheapest of political points. It is despicable. I trust Leslie Rutledge for Arkansas will make clear that she had nothing to do with these ads, and she finds these ads to be unfair, grossly misleading, and beyond the pale. If she does not, she has lost my vote.
As voters, we must stand united against these vile manipulations by out-of-state stealth PACs. Ask yourself why this 501c4 from Alexandria, Virginia cares enough to spend $1,000,000+ in Arkansas to try to humiliate a decent man. If we don’t find a way to make this garbage backfire on the groups that spit it out, we will get exactly what we deserve in the quality of our elected officials.

Of all people, Leslie Rutledge should repudiate this stuff. Bu her own campaign coordinates with the dishonest message being pumped out by this shadowy bunch from Virginia. In her own primary race, another anonymous dark money group beat up dishonestly on Leslie Rutledge. I defended Rutledge at the time.

Rutledge didn’t like those dark money ads at all. She denounced them as “spreading lies.” She called them “manipulative” and “the worst of dirty politics.” And, she said, those who refused to denounce them were “dishonest.”

Don’t hold your breath for Rutledge to denounce Steel’s critics as dishonest for firing from hiding. All’s fair in her attack on Nate Steel, including avoiding disclosure of details about her work that got her labeled unhireable for gross misconduct at the Department of Human Services.

What or who is the Center for Individual Freedom? Good question. They call themselves nonpartisan, but good luck finding a time when their “educational” efforts targeted a Republican. Their history includes an outreach for tobacco money in early days, but more recently, Karl Rove’s 501c4, Crossroads GPS, has been a big contributor.  They’ve worked across the country to defend voter ID laws. They’ve worked also to fight state laws that require disclosure of people who contribute to political advertising such as their hit on Nate Steel.

Perhaps somebody should ask Leslie Rutledge how  she feels about laws that require disclosure of such political advertising. There was a time when she might have said yes.

Here’s Sourcewatch on the group.

More on point, here’s Mother Jones on its activities:

Among political money experts, CFIF is known for its aggressive legal strategy aimed at toppling disclosure laws at the state level. In other words, Crossroads GPS, which doesn’t name its donors, gave millions to another dark-money group whose goals include fighting to keep dark money in the dark.

Spokesman Jonathan Collegio wrote in an email that Crossroads GPS’ donations to ‘effective center right organizations’ such as CFIF are intended to ‘help build an enduring infrastructure on the right — just as labor unions have funded organizations on the Left for decades.’”

Who’s paying $1.8 million to beat Nate Steel and why is it so important to them? The answer can’t be good for Arkansas.

By the way: Steel and Rutledge debate this morning on KARK’s Capitol View. 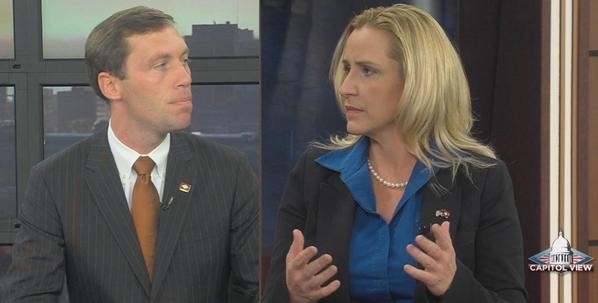