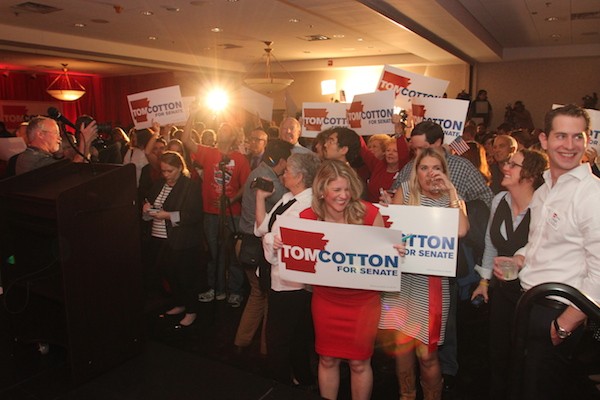 The minute the polls closed, CNN hit the air with a projection from exit polls that U.S. Rep. Tom Cotton, the Republican, would win the $60 million race with Democratic Sen. Mark Pryor. That suggests a gap in line with widening numbers in most recent polls.

Minutes later, they followed with a projection of victory by Republican Asa Hutchinson over Democrat Mike Ross in the race for governor.

The early declarations  don’t bode well for every Democratic office down the ballot and could presage the Republican sweep that many have projected. No word yet on congressional races.

As yet, there are few actual numbers, just the projections based on exit polling. But I’ve no reason to question them.

Arkansas will have two Republican senators. The 2nd and 4th Congressional District races as yet haven’t been called. No news in yet either on the other six races for statewide office. The party that wins the majority of those is the official majority party and holds the majority of seats on county election commissions. Should Republican win three more plus the governor, they’d be the majority party for the first time, a prize to go along with their first matched set of senators.

A hard night for the Pryor family, a force in Arkansas politics since the 1960s. Former Sen. David Pryor, 80, and his wife, Barbara, campaigned the state for their son.

President Obama was the cornerstone of every Republican race, along with his health care legislation. He won’t be on the ballot again, but he perhaps contributed to a reversal of the basic political psyche of Arkansas into a red state like the others in Dixie.

Here’s the early vote from Pulaski County. It’s no indicator of statewide partisan races (Pryor leads here with 58 percent of the vote, as did Mike Ross), but down the list you should find good indicators of races within the county.

In the 2nd District, Pat Hays, the Democrat, had 56 percent of the vote over Republican French Hill. Whether that’s enough to offset Republican strongholds in the suburbs remains to be seen.

Important indicators in four races for state House in Little Rock: Republicans lead two — one in a seat held by a Republican with Jim Sorvillo leading John Adams, and one in a seat held by a term-limited Democrat, Karolyn Brown over Danny Knight; Democrats lead in two — Clarke Tucker in District 35 with a wide lead in early voting over Stacy Hurst and incumbent Rep. Patti Julian with a narrow lead over a Republican challenger, Donnie Copeland. Should those results wind up the outcomes, it would be an important gain of one seat for Republicans in Pulaski County as they battle to expand from their current 51-seat majority.

A quick scan of some other local races: Democrat Barry Hyde has a big early lead over Republican Phil Wyrick in the race for county judge; the eternal Erma Hendrix has a big lead in another race for City Board, and incumbent City Director Ken Richardson leads Pam Adcock, a former state representative.

I’m going to be off to Fox 16 in a minute for an hour of election analysis, then will check back in later tonight.

You can get Pulaski results here.

Several options exist for statewide returns. KATV for one. Also the Arkansas Democrat-Gazette, which lifts its pay wall on election night. The secretary of state’s office always touts its returns, but they’ve always run behind the news operations badly and given Secretary of State Mark Martin’s general incompetence I wouldn’t expect that to change tonight.

The Times crew is around tonight at election headquarters with video cameras and we have people in the office to begin boiling down results into chunks of coverage later tonight.

National numbers are dreary for Democrats, as I’m sure you know. An unexpectedly tight race for Sen. Mark Warner in Virginia; destruction of Democrat Alison Grimes in Kentucky, the expected loss of a Democratic Senate seat in West Virginia.

On Arkansas returns, though trends might be clear from the start, remember that vote totals differ dramatically by region. Historically, Benton County, with its big Republican vote, has been one of the last counties to report. Pulaski County, the most populous and typically Democratic, sometimes is a late reporter, too, and those big numbers can affect statewide and, in the 2nd District, congressional races.