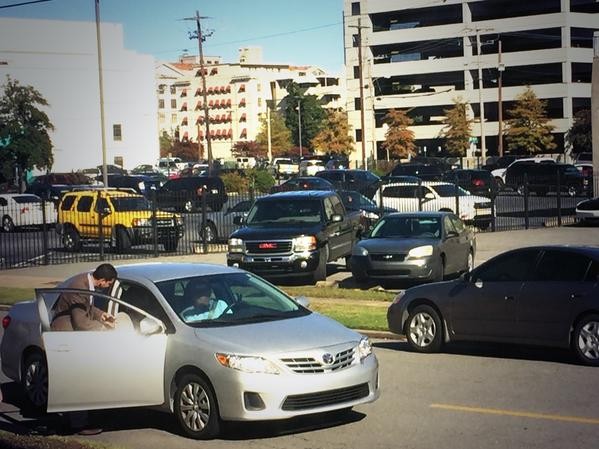 Uber, the hotshot car service built on a mobile app, has decided not to wait for a regulatory ordinance tailored to its operation to begin operations in Little Rock.

A news release from an Uber representative and a website say Uber will begin offering service at noon today in Little Rock, with a come-on of five free rides to entice passengers.

The Little Rock City Board has been working on an ordinance to permit the operation in the city as a “transportation network” company, with specifics on drivers, vehicles and insurance that resemble, but are not identical to, those covering taxi operators. The city currently has one cab franchise.

Uber started operations similarly in Fayetteville without a permit and its drivers have received occasional tickets for operating without a permit. The company has similarly steamrolled other cities and inspired a rising organized protest from cab drivers who focus on, among ohers, difference in insurance coverage. Uber limits insurance liability to the time a rider is on an Uber-obtained ride.

The Little Rock City Board was to discuss the permitting ordinance Monday, but the discussion was deferred because of differences on some points. The website addresses the permitting issue:

Your Little Rock city board members are taking steps toward finding a permanent home for new technologies like ridesharing. Much like we do in every other city in which we operate, we hope to continue to work with them in ensuring that this ordinance is in the best interest of Little Rock riders and drivers.

This is somewhat disingenuous. They could have said more honestly: “We were willing to operate under a permit drawn to our specifications, but not having gotten that done, we’re going to start business anway. If the city wants to cave, fine, if not, fine. Sue us. Or knock yourself out writing tickets.”

I have calls in to city officials about a response. I look forward to a day when an Uber rep gets in a room with City Director Joan Adcock, who’s friendly with the local cab franchise holder and who’s had the most objections to operations of such services here.  She’s a bulldog.

Uber promises guaranteed prices charged to a credit card and allows passengers to share rides. It claims bettter prices, about $15 from the airport to downtown, for example. It says response may not be speedy in the rollout phase as it continues to recruit drivers.

My immediate thoughts: 1) I’m not a huge fan of local cab service 2) I’ve heard from a lot of satisfied Uber customers in other cities 3) Uber should be under a city regulatory umbrella for protection of consumers but it should allow for its differences from conventional cabs, and 4) I don’t like it when people throw their weight around and say fuck you to city government just because they have $15 billion in market capitalization.

City Attorney Tom Carpenter confirms that to operate now would be illegal, but he also notes that the company has done the same elsewhere. I’m awaiting word from the city manager on reaction or enforcement plans, if any.

He later sent this note to the Board:

“I received from the Arkansas Times a notice that UBER has announced it will turn on its APP today and start transporting riders within the City. They do not have a permit. They cannot legally operate without a permit. This is not an unusual step for UBER around the Country, or in Arkansas. In Fayetteville, they did the same thing and are being fine. In some instances, UBER has paid the fine for its drivers.

“If the BOD wishes for this action to be stopped until the TNC ordinance — which UBER asked to be deferred — is approved, please let me know. We will need to seek injunctive relief, and to coordinate with LRPD when an injunction is granted. Unless I am given instructions to seek an injunction, however, I do not feel comfortable seeking one because I have heard numerous favorable and unfavorable comments from the BOD, and do not know the City’s position.”

Board members are responding, with at least three directors — Brad Cazort, Doris Wright and Joan Adcock — already expressing support for seeking injunctive relief. (These are not votes, Carpenter makes clear.) Said Adcock: “Why would we not enforce our laws? What good are rules or laws if not enforced?”

The fact that Uber is moving after IT called for a deferral is likely to prompt some directors to push to approve the ordinance as written, with parts objectionable to Uber.

UPDATE: I talked by phone with Billy Guernier, general manager for regional expansion for Uber, who said the company decided to move because it wanted to be up and running for coming “big events” in the city, including the 10th birthday observance for the Clinton Library.

Guernier said it takes the view that there are currently no regulations that apply to ride-sharing companies so it may operate. He said he couldn’t comment on my report of planned legal action because he wasn’t aware of it. He said the company had been working for “weeks and months” on an ordinance and hoped to continue to do so. A bargaining tactic? Guernier doesn’t see it that way. Instead, he said it’s about “riders and drivers and people needing transporation and jobs.”

He declined to say precisely how many drivers were signed up in Little Rock with the app beyond “thousands.” Number of drivers ready to work: “dozens.” He wouldn’t be more specific.

Uber will have no officials in Little rock. Guernier himself called from the road. He said the company conintued to operate in Fayetteville without permits and occasional tickets and hoped to reach an accommodation with the city. He said the company “stands behind our partners,” meaning it will provide defense and pay tickets when justified.

Guernier emphasized that Uber’s $1 million insurance limit when riders are in cars is higher than taxi coverage. But it provides no coverage for drivers not on the system (they must have their own private insurance) and a $50,000/$100,000/$25,000 limit for cars when they are without passengers but responding to calls.

What happens if the city adopts an ordinance Uber doesn’t like?  Guernier said he couldn’t respond to the hypothetical.

UPDATE: This statement from the city at day’s end:


Currently, we are still at the same stage in the process we were when you first reported it this morning. Our city attorney has presented the board with available options (seeking an injunction). We are waiting on a decision on how to move forward.